Dark alternative Dutch innovators GGGOLDDD have revealed an impactful new single titled ‘Invisible’ from their upcoming album This Shame Should Not Be Mine released on 1 April via Artoffact Records.

‘Invisible’ is about feeling alone and unseen after experiencing sexual assault. It’s about keeping it all to yourself. Which makes it impossible to process the trauma. This makes you feel isolated and alone – as is laid bare in the filming of the video, which features vocalist Milena Eva positioned in an isolated frame of nothing but black.

Milena elaborates: “I’ve struggled to say out loud that I was hurting. You can hear this vulnerability in the super intimate electronic parts. And you can hear the overwhelming effect of such trauma in the huge, bombastic choruses.”

“The assault happened to me years ago and I kept it a secret out of shame and guilt. Every time I met somebody new or if I felt insecure I got really paranoid. I was so scared people could tell from my face I wasn’t doing alright. I tried to keep it all together. Faking my way through everything. Now I know that this was really toxic for my mind and body. It literally made me sick.

“The shame and the fear really take their toll. I think we should all take a good look at ourselves. How can we make sure that the assault doesn’t happen any more? But also how do we evolve into a world where people can live without shame?”

The band’s most ambitious and masterful work to date, This Shame Should Not Be Mine was conceived in the silence of 2020’s pandemic lockdown, partly as a way for GGGOLDDD lead singer Milena Eva to confront parts of her past and partly in response to the Roadburn Festival’s invitation to propose a commissioned piece for its 2021 online edition.

This Shame Should Not Be Mine is out on 1 April and can be pre-ordered here. 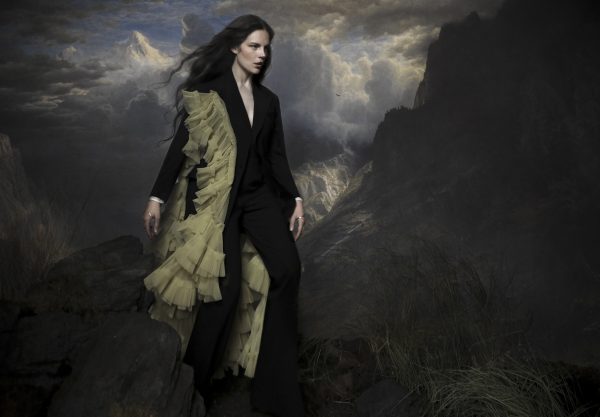 In the silence of 2020’s lockdown, Milena Eva was confronted with parts of her past that had been long buried. Bubbling up to the surface, repressed memories and traumatic events pushed their way into her daily life until they could no longer be ignored. With no choice but to confront her past, she accepted its presence in the present, an unwelcome houseguest during already uncomfortable times.

Around the same time, Roadburn Festival approached GGGOLDDD to propose a commissioned performance for the 2021 online edition of the festival – and the opportunity granted Milena a creative outlet to process her emotions. Shortly before their Roadburn performance, Milena revealed that she had been raped aged 19; it is the memories of this time and its lasting impact on her that informed This Shame Should Not Be Mine.

Following the Roadburn show — which was the most viewed and talked about set of the festival and was likened by viewers to acts like Portishead, Massive Attack and Björk — GGGOLDDD had a desire to commit the work to record as soon as possible. They returned to Jaime Gomez Arrelano’s Orgone Studio (Ghost, Grave Pleasures, Paradise Lost) in the UK where they also recorded 2019’s Why Aren’t You Laughing? Granting themselves more time to record than with previous sessions, they worked at a pace that allowed room to breathe and process as they went.

The remote location of the studio returned Milena to the silence of her previous emotional confrontations; only this time she embraced the quiet, the distance from real life and the capaciousness of the setting. Mastering was undertaken by Cicely Balston, ensuring that the story and all musical ideas transpired with maximum impact. This setup alongside the recording environment allowed GGGOLDDD to craft the album as they had envisioned it: a dark and contemporary pop album that exists in its own sonic universe.

Visually, the album is complemented by stunning artwork courtesy of Milan-based photographer Szilveszter Makó. The images depicting Milena as a pre-Raphaelite beauty encased in armour display a metaphor for the emotional armour she has worn for years.

With This Shame Should Not Be Mine, GGGOLDDD has delivered the most bold and ambitious work of their career to date. Capturing the essence of both extreme vulnerability and the strength gained from the process of reclaiming ownership of one’s past, these ten tracks are an intimate anthology of transformative power.

This Shame Should Not Be Mine is due for release on April 1st, 2022, via Toronto-based Artoffact Records as deluxe double-vinyl and double-CD editions, which include a recording of the band’s 2021 Roadburn Festival performance as bonus material. The album also comes as a standalone single-LP edition, as well as digital configurations on streaming and download stores.