A jaunt through Thorogood’s musical DNA

So, 2017 sees the welcome return to active service of George Thorogood. His last studio album was 2011’s ‘2120 South Michigan Ave’, a fine album of blues covers. This years ‘Party Of One’ is his first ever solo release…and a fine album of blues covers. Although this time around it’s primarily acoustic and played entirely by the man himself. It’s an interesting closing of the circle for Mr.T, who started out as a solo acoustic performer in the 70’s.

A cursory glance at the track list confirms that we pretty much know what we’re going to get. George has always been a “give ’em what they want” kind of guy and there’s nothing wrong with that. His heroes and influences have always been worn on his sleeve and any unexpected, left field musical diversions at this stage of the game would be akin to AC/DC releasing a jazz fusion album.

Quite reasonably, the album starts with ‘I’m A Steady Rollin’ Man’, a long time live staple, written by Robert Johnson, the man who pretty much kickstarted the blues. The song is here reshaped as an electro-acoustic number with dive-bombing slide. This is closely followed by ‘Soft Spot’, a Gary Nicholson country tune. Country has long been a Thorogood influence and this song has it all – hard times, lovin’ parents and a healthy dose of sentimentality. Country is represented again with Hank Williams and a spookily good Johnny Cash impression on ‘Bad News’, good ole’ badass outlaw stuff which fits in perfectly with Thorogoods identity.

Elsewhere on the blues front we have Howlin’ Wolf, Willie Dixon, the folk blues of Brownie McGhee and the two artists who are pretty much the joint biological parents of GT’s musical DNA – Elmore James and John Lee Hooker.

Obviously slide guitar will be paramount in the Elmore James songs and ‘Got To Move’ has the growling, low down electric variety – you can’t play Elmore and not plug in! And sure enough when the solo arrives it’s as mean as a particularly hacked off rattlesnake. Meanwhile, ‘The Sky Is Crying’ is an entirely acoustic reading of James’ masterpiece, pretty much covered by everyone and anyone who claims to play the blues and this low key rendition is a reverential gem.

Hookers covers, meanwhile, bring the other key ingredient – boogie. Thorogoods’ vocal impression is uncanny and his guitar choogles with joyful menace for a trio of Hooker classics, including the damn near essential ‘Boogie Chillen’. Even in this acoustic setting the boogie is immaculate and flawless.

Thorogood even includes a few nods to his post blues heroes. His take on Bob Dylans’ ‘Down The Highway’, reminding us of the blues roots that fed into Dylans “wild mercury sound”. We also get a wistful, mournful trip through the Stones ‘No Expectations’, which, if you didn’t know it was a Jagger/Richards composition, you’d swear was written and recorded in that infamous Texas hotel room by Robert Johnson.

This album is a joy. A warm, affectionate, heartfelt and gritty doff of the cap to his heroes – a melting pot of lonesome country, urban Chicago blues and barroom rock ‘n roll – all retaining that ragged, good time Thorogood vibe. Every instrument – guitar, dobro and harmonica, are played by the man himself. And that is the albums masterstroke – it’s just him. Connecting with and paying tribute to the people he grew up listening to. An unpretentious, unshowy pleasure. 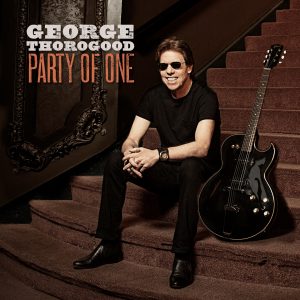