Ok, so if you’ve listened to the above song you’ll already know whether or not this is for you. I’m kinda redundant here, there’s not much I need to say. But I will. So, in the style of Joe Satriani’s G3 shows, fellow axe maestro Steve Vai has put together Generation Axe – one backing band, 5 guitar wizards. They rock, they showboat (a lot) and, erm, that’s about it.

The real question is, if you’re not an absolute guitar anorak, if you don’t get faintly aroused by discussions about pickups and effects pedals, is this collection of long, shred-tastic songs worth your time and attention? The answer, I think, is a tentative yes.

The line-up? Vai! Nuno Bettencourt! Zakk Wylde! Yngwie Malmsteen! And, er, Tosin Abasi! You may, at this point, scratch your head. Let’s, in that case, start with the latter. Abasi is the guitarist with experimental prog instrumentallers Animals As Leaders and, after a quick introductory shred by the collective, is the first to take centre stage. He blasts into a display of uber heavy prog/jazz/math etc virtuosity which is, frankly, mind bending. Angular and bruising, it never stays still long enough to become wearing.

Next up is Mr. Bettencourt who ramps up the fun quotient with ‘A Side Of Mash’. Minimalism is not a byword here – this rocks…and widdles. A lot. He definitely brings a funk fluidity to proceedings, plus dashes of silky Hendrix, heavily distorted bluegrass and snippets of ‘Play With Me’ – y’know the solo from the mall scene in Bill & Ted. Excellent!

Nuno is then joined by Zakk Wylde for the evenings only ballad and definitely its most inspired and unexpected song choice – ‘Sideways’ By Citizen Cope. Piano joins guitar and blends with Wyldes whiskery, whiskey howl for a moving mini epic, replete with huge solo and even a spot of George Benson style guitar/scat singing action.

We then stomp into the albums heaviest movement. Wylde tears into a raw, badass rampage through the Allmans ‘Whipping Post’ (angry and desperate, this is how this song should be played) before Steve Vai rips a new one in possibly his heaviest track, ‘Bad Horsie’. It’s a jaw-dropping masterclass – his guitar chugs, cries, wails, spits, roars and soars.

Heaviest moments, yes, but not the most bombastic because here comes Yngwie Malmsteen with a breakneck medley of some of his most OTT moments. It’s Yngwie doing what Yngwie does, playing lots of very fast classically tinged arpeggios. For a long time. Vai then joins him for 8 more minutes of the same.

And then it’s time for the all-star jam. ‘Frankenstein’ and ‘Highway Star’ both get the 10+ minute treatment. Intro riffs rapidly spinning off into multiple solos, each faster and wilder than the last. Kudos though to Mr. Vai for not letting it all get out of hand – there is structure here, the song always returns to grapple control from the virtuoso’s. Although, if you’re not a total guitar head, they do veer perilously close to the rocky shores of the isle of ‘outstaying their welcome’.

So yes, shredding fans, knock yourself out. For the rest of us, this is still worth a listen. Great song choices, a prudently chosen variety of styles and a well structured and paced show make for an interesting and enjoyable release. Party on, guitar dudes. 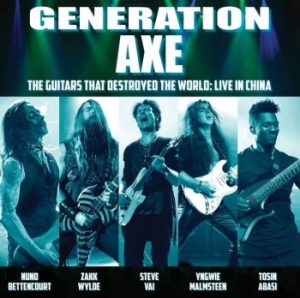