This, believe it or not, is album number 21 from Gary Hoey. It is, however, only his 3rd blues album, following on from 2016’s patchy and somewhat derivative ‘Dust & Bones’, the remainder of his oeuvre being a baffling smorgasbord of Christmas albums, surf albums and obscure soundtracks. So, is this late period switch to blues kosher? Will he convince on ‘Neon Highway Blues’?

The answer is a resounding yes. It is, simply, the most enjoyable blues rock album I’ve heard this year. Though make no mistake, this is blues rock – chunky of riff and muscular of structure. But, and this is a big but (sniggers), the blues is never ignored, never forgotten or swept to the side – it’s the foundation and the bedrock of every track here. It’s heart and soul is in the cottonfields and the streets of Chicago.

We begin with a slick one-two of guest star assisted tracks. ‘Under The Rug’ sees Hoey trading solos with Eric Gales – it’s a mellow affair, only getting widdly towards the end. Josh Smith then joins the fray for the slow blues of ‘Mercy Of Love’ – again, there is mucho solo trading bonhomie. It covers all the blues tropes while doing nothing outside of the box but, hey, when it’s done this well that’s ok.

However, the following track, ‘Your Kind Of Love’, proves that Hoey doesn’t need the guests, he’s coping just fine on his own. Another standard blues, it has shades of a mellow George Thorogood with its subtle slide work. Mellow is a key word throughout, it rocks, yes, but it’s also smooth, chilled…in an almost Eagles/Huey Lewis stylee. We’re then in guest territory again with ‘Don’t Come Crying’, featuring his then 16 year old son, Ian, who acquits himself more than admirably. Again, it’s essentially a set up for more soloing but the Hoey boys gel well together, playing with heart and fluidity.

From here on in the album is a game of two halves. It’s a fairly even split between muscular riffage and EPIC instrumentals. The instrumentals follow the 80’s soundtrack blueprint. Y’know the bit when Tom Cruise/Nick Cage’s best buddy dies in a Tony Scott movie? These are the tunes you hear in the background – acoustic rhythm, momentous key changes and soaring airbrushed solos. They’re widescreen, cinemascope, surround sound blues-o-rama emotion-fests.

And the riffage? It’s all here – powerchords, fuzz, big clanking bass and solo’s all over the shop. But the blues is always there, never a token gesture. Elmore James nods mingle with steroid gobbling Gibsons and Marshall stacks. Zep-lite shares centre stage with BB King while Lance Lopez briefly appears to spit out hellfire and damnation licks. The album ends with the wonderful title track, a swampy, late night, sultry instrumental. Its smooth, fluting slide and fuzzed twang do indeed conjure images of that neon highway. Driving all night down an endless road – radio on, foot on the pedal, fireflies hitting the windscreen.

Hoey took his time with this album and it shows. It’s well written, immaculately performed and, above all else, fun. It’s unpretentious, respectful, happy, somewhat smooth and always bluesy. Ok, maybe there’s an instrumental too many but it’s a minor gripe. Hoey sounds relaxed, more confident, totally bedded in as a bluesman. It’s an interesting mixture of styles and he’s found his own voice. It’s a fine, middle of the road blues album that could see Mr. Hoey become a big name.

Released on 15 March 2019 by Provogue Records 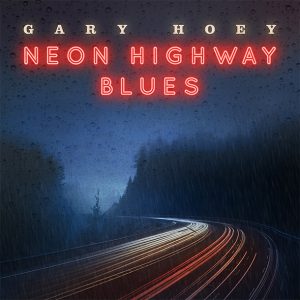