Blues albums released by Provogue? No brainers. It’s their thing. They know their stuff and their artists. Hence the raised eyebrow when the PR bumpf for ‘Dust & Bones’, the new album from Gary Hoey, states that it is his 20th release. 20th? Gary Whoey?

To describe Hoey’s career as varied is something of an understatement. This is actually only his second blues album, following on from 2013’s ‘Deja Blue’. Elsewhere his discography includes surf albums (including a duet with Dick Dale), soundtracks to B-movies you’ve never heard of, and quite a few Christmas cd’s – one of which is entitled (and I shit you not) ‘Ho Ho Hoey’…

And it gets more random. He auditioned for the role of Ozzys guitar foil in the 90’s (losing out to a certain Mr. Wylde), which was also around the time that he bothered the lower end of the charts with a cover of ‘Hocus Pocus’. He has also written a theme song for a Disney rollercoaster and some of those annoying little tunes that play when you open greetings cards.

So, is Hoey a bluesman at heart or is this just another genre? Another side road on his journey? Opening tune ‘Boxcar Blues’ is straightforward and fun. Metallic slide launches us into a strident blues rock number with a fluid bottleneck solo. And this is where Hoeys storied past catches up with him. I still don’t feel like I know who he is – his personality doesn’t come through. There are songs where you feel that he comes close to finding his own voice. ‘Ghost Of Yesterday’ and ‘Blind Faith’ are heavier blues rock offerings. They chug and growl, full to bursting with wah wah and greasy slide.

But most of the rest of the album consists of…ahem, tributes. Luckily these songs are played with such enthusiasm and enjoyment that they don’t come across as plagiarism. If he had been just ripping artists off I think he would have covered his tracks a little better. During the course of the album we hear ZZ Top boogies, Brain Setzer rockabilly tear ups, B.B. King/Bonamassa hybrids, Johnny Winter rockers and languid Robin Trower slow burns. Half of the listeners pleasure comes from playing ‘spot the influence’ (although I’ve given away a lot of the answers).

Throw in a couple of radio-friendly, Thunder-lite rock songs and Robert’s your mothers brother. So, we have an album that’s full of personality, but sadly not much of it is Hoeys. It’s an enjoyable, solid, workmanlike blues rock cd but to compete with your Bonamassas and Patlanskys it needs to be a whole lot more. I’ll still be looking forward to album #21, hopefully this was just a nod to his heroes that he needed to get out of his system. 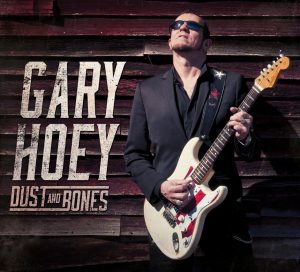