Maybe it’s living under the yoke of an oppressive religion, but Poland has been birthing some tasty blackened thrash bands of late and leading the pack are Szczecin’s Garota. With a sound that melds the atmospherics of black metal to visceral rage of classic thrash, they’re certainly not made for the faint of heart and such is the power of their debut album, Czarne Wizje, that it should really come with a health warning.

Attesting to their sense of urgency Garota waste little time on fancy introductions or other such nonsense and they get straight down to business with bombastic opener ‘W Oczach Diabła’. It’s a track that, like a thirsty vampire, goes straight for the jugular and it sets a dangerous precedent for the rest of the album. It’s a tasty smorgasbord of ferocious blastbeats, sinewy guitar solos and some hardcore-esque vocals. In fact, guitarist and singer Asbiel has a voice that reminds me of Agnostic Front’s Roger Miret and the whole aesthetic of Czarne Wizje perfectly captures that moment in time when bands such as Bathory and Celtic Frost melded proto-thrash to the D-beat and spawned a whole new genre. However, don’t write Garota off as mere copyists because nothing could be further from the truth; they’ve certainly found their own signature sound and when you hear the first few notes of ‘Prymitywne Rytuały’ you know it could only be Garota. As English continues to become the global lingua franca, it’s heartening that this Polish crew sing in their native tongue, and it adds an authenticity and potency that many of their peers lack.

I’m a big fan of three-piece bands, there’s something so compact and almost magical about a trinity of musicians playing extreme metal. With no place to hide each instrument must come to the fore and the result, when played right, can be akin to standing before the very gates of hell. That’s definitely what Garota achieve and some of the credit must go to (those with excellent monikers) Sid Fetishious (bass) and drummer Witchfucker who combine to create a formidable rhythm section that barely lets up over 34 furious minutes. Cuts such as ‘Czarne Wizje Pełne Krwi’ create an ominous feeling, a sense of storm clouds gathering on the horizon, while ‘Płomień Przykrywa Niebo’ arrives like an invading army and causes all sorts of destruction. When played incorrectly, the type of blackened thrash in which Garota peddle can become very one-dimensional and generic, but such is the power they posses that each of the eight tracks comprising Czarne Wizje has its own unique character that makes for a well-rounded, satisfying listen.

Building on the good work of their debut EP (2021’s Najstarszy Zawód Świata) Czarne Wizje evidences a band mining a rich seam…and long may it continue! 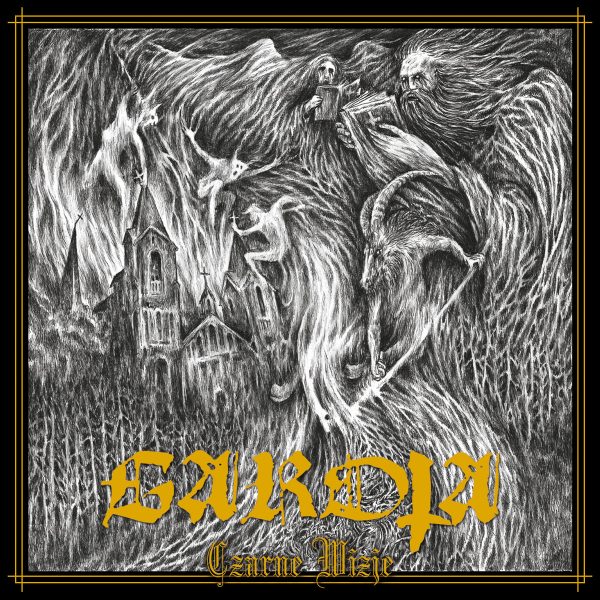