Released by EarMUSIC on 29 September 2017

The competing tensions of “old world” traditions versus “new world” freedoms had run their course with Gamma Ray’s first three albums, with only Insanity & Genius nudging the needle of the band’s stylistic compass in the right direction. But there can be no doubt that the band’s fourth studio release, Land Of The Free (1995), was the recording that freed Kai Hansen from the invisible ties that bound him to Helloween.

He seemed liberated, having apparently abandoned the limiting structures of the heavy metal formula, and he was now handling lead vocals himself. No chapter and verse, bridge, chorus rules need apply here.

And now, it is the latest in a sequence of Gamma Ray albums being released by Germany’s Ear Music in remastered and expanded form – there is a value add second disc of bonus material.

In ’95, the magisterial ‘Rebellion In Dreamland’ – a relentless sonic assault of dramatic Wagnerian intensity – opened our window onto the world of the “new” Gamma Ray, and it is the perfect track to profit from a sharper, clearer, remastered audio. ‘Man On A Mission’ isn’t far behind. Its spiralling bpms seem to race around the room in this remastered form, occasionally pausing to club you over the head, pushing Hansen’s lyrical rage against government surveillance into high definition sensory overload.

The bonus second disc opens with a rip roaring cover of Holocaust‘s ‘Heavy Metal Mania’, fuelled by the unrelenting power of the Scottish band’s notoriously primal riff. It was originally the bonus track on the Japanese release. Previous bonus tracks, the pre-production version of ‘As Time Goes By’ and ‘The Silence ’95’, from their Silent Miracles EP are also here.

The remainder is filled out with manic, head bangin’, pulse quickening instrumental versions of milestone Gamma Ray tracks, recorded live in the studio. A goldmine for Gamma Ray aficionados and your ordinary discerning Metal fan alike. 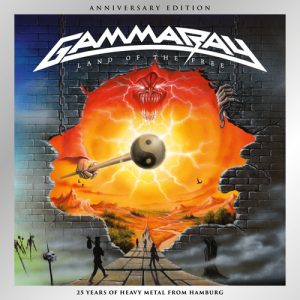