Recorded at multiple venues across Europe during the band’s Land Of The Free (Men On Tour) tour, Alive ’95 is not so much a memento of those moments in time, but more a celebration of the band’s arrival in a post-Helloween promised land. It is now remastered, repackaged and reissued as a double disc set in a slick digipack.

Having thrown away the songwriter’s guide book to heavy metal, and with Kai Hansen now handling vocals, you can hear the band enjoying every moment of their new found freedom. Hansen’s unconventionally structured songs come tumbling out onto the stage and into the audience, one after the other, with Hansen and Schlatter’s sandblasting riffs revealing rich melodies as the songs zoom past. It’s all so tight and punchy. You would swear some of these songs, perhaps most notably ‘Abyss Of The Void’, ‘Saviour’ and ‘Tribute To The Past’ are the studio versions, taut and wiry, pumped up into larger than life, stadium friendly proportions. Part performance, part remaster.

Disc two’s hidden secret is a genuine bonus, as it includes material recorded with original vocalist and human siren, Ralf Scheepers. Once you have adjusted to the Hansen vocalised band, it’s so easy to forget that Scheeper’s formidable range and power helped hugely to shape the band’s sound and cement its reputation in those early days. Six immense tracks. A bonus indeed. 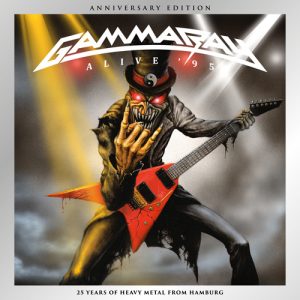