1991, Kurt Cobain had annexed mainstream rock by accident, and the world of popular music shifted on its axis. Many rock and metal bands couldn’t adjust and were crushed by the gravitational pull of the new reality. Others ran for cover, hiding underneath new day-job disguises, waiting it out. But Kai Hansen and his band, Gamma Ray, stayed in steady orbit, pounding out undiluted Power Metal, filled with imaginative production flourishes, bent-out-of-shape melodies and raw unbridled power. Hansen reflected the new order with opening track, ‘Changes’, on his band’s second album Sigh No More. And, free of the Helloween straitjacket, he experimented. A little.

Throughout this 2 CD re-issue/remaster, you could sense he was feeling his way into what he wanted Gamma Ray to be. Not exactly a brave new world of post grunge metal, and neither a pale copy of Helloween, (or of Judas Priest, as has been alleged) more a clattering orchestral refinement of heavy metal, one that nods occasionally to the past, while chiselling away at its own slowly forming identity. Like the wonderfully punky undertones and music hall chorus of ‘Rich & Famous’, and the bass heavy ‘Stop The War’, where Hansen realigned his gun sight, took aim at melodic hard rock and hit the target with laser guided accuracy. Still, these tracks stood respectively to one side while Hansen embedded power metal nuggets like ‘One With The World’, ‘As Time Goes By’ and ‘Dream Healer’ into this new landscape. It’s a mark of Hansen and the band’s voracious creative energy that these competing currents seem pure and instinctive.

It didn’t meet with universal acclaim. Many fans just wanted a Helloween clone. But to become what they eventually became, Gamma Ray needed to step their way through the murky waters of revised expectations and calcifying tastes with care and purpose. Disc 2 includes four perfect picks from the Blast From The Past album that was released around the year 2000…’Changes’, ‘Rich And Famous’, ‘One With The World’ and ‘Dream Healer’. These re-recordings sound sumptuous in their more advanced, studio technology finery. That said, ‘One With The World’ competes with itself on this bonus disc, with the re-recorded effort fighting an immense, 5 minute ‘Live At Wacken, 2001’ version to a draw. Elsewhere, there’s a clutch of demos – key album tracks, with the original guide vocals from Hansen. 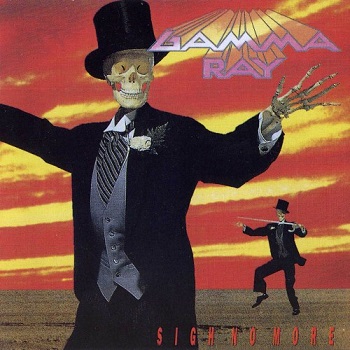 Heading For The East – Remaster / Reissue

The self-explanatory Heading For The East album, a live recording, was originally designed as a VHS video (remember them?), and is now on CD (in fact 2 CDs) for the first time, remastered by Sound Engineer, Eike Freese. The band’s first album, Heading For Tomorrow (1990) had taken off in Japan, a country yet to be overwhelmed by the grunge tsunami, and a tour of four of the country’s major cities was hastily arranged to capitalise on that success.

The biggest and best took place in Tokyo, and this is it. And the music is as it should be: armour-plated, fierce, melodic and projected out to the audience with an infectious enthusiasm. It was a manifestation of the band’s success throughout Europe and the Far East. It’s mostly live versions of the album tracks, but also includes a trio of Hansen penned Helloween tracks, ‘I Want Out, ‘Ride The Sky’ and ‘Save Us’, as well as Vocalist, Ralf Scheeper’s ‘Freetime’, a song he brought with him from previous band, Tytan.

These albums are milestones in two senses. One, the original releases were early steps in what would become a 25 years journey, and two, these remastered and extended anniversary versions are only the beginning in a marathon series of reissues, encompassing all of the band’s recorded work, 1990-2015. 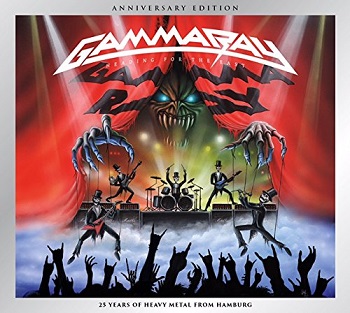