Released 16 May by earMUSIC, written by Brian “rifftastic” McGowan

It’s a perverse notion that Insanity& Genius is remarkable only because it is the last of the 3 albums on which Ralf Scheepers appeared. Or even more perversely that it is special because it is the album preceding the groundbreaking Land Of The Free. It has been readily condemned by cynical and jaded observers for being “not a great album”, yet it yields many great moments, and in time, those moments multiply, revealing themselves willingly and joyously to the patient and the obsessive. Stranger still, given the criticism, they come thick and fast on the earlier tracks, and it’s worth taking another look at them, 20 years on.

Kai Hansen’s self proclaimed ‘genius’ is never more evident than on the Wagnerian opening track, ‘Tribute To The Past’. (assuming that Wagner wrote operatic arias for falsetto singing metalheads as well as bass/baritones). It verges on the cheesy at some points and the transitions can be clumsy, but the dazzling, twinned axework pieces (between Hansen and Dirk Schlatter) are utterly inspired. Similarly, ‘No Return’, a blazing, armour plated chunk of heavy metal, is ignited by the heat from Schlatter’s and Hansen’s fiery, eminently melodic axework. Even on the thrashy ‘Last Before The Storm’, often sounding like a Teutonic twist on American hard rock, the ordinariness of the verse and chorus is redeemed by the axework’s coating of edgy melodic sweetness. And you’ll not get many better resonating, riff heavy intros than on ‘The Cave Principle”, even if the rest of the track doesn’t quite measure up.

Thereafter, the “Insanity” half of the equation sticks its head above the parapet occasionally. But certainly not often enough to undermine ‘Gamma Ray’ (the song), a Talking Heads channelling Guns’n’Roses’ track, where a rapidfire chorus, reinforced by a pounding keyboard riff, suddenly emerges from a wordy lyric, catching you totally by surprise, like a jump scare in a horror movie.

The bonus second disc captures a raft of demos and live tracks, all of them – as with the primary disc – remastered by Eike Freese, hiking up the sonics to studio recorded quality. All that plus a powerful cover of Judas Priest’s ‘Exciter’.

The band’s critically acclaimed Lust For Live album – recorded on the back of the Insanity& Genius tour – was previously available only in Video/DVD formats. Now, with judicious pruning of the boring interview stuff, it’s been released in CD form, with remastered audio (again by Eike Freese). And inevitably, it comes with two bonus tracks, including a cracking ‘Heading For Tomorrow/Dream Healer’ medley. As you might expect, it draws fairly evenly from the 3 albums released to that point. If anything, it reflects the notion that the band is not yet full blown Gamma Ray, and Hansen tacitly admits as much by climaxing the gig with a medley of songs he penned for Helloween, ‘I Want Out / Future World / Ride The Sky’.

Neither Insanity & Genius nor Lust For Live will ever be considered as the band’s best albums, but as primers for the developing Gamma Ray sound, they should be considered invaluable. 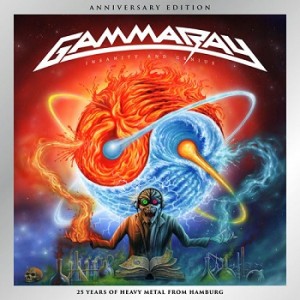 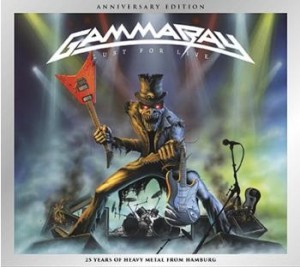