For anyone of a certain age, the reappearance of Galactic Cowboys is an interesting proposition. For those who don’t remember (or weren’t even there), they were one of a large, exclusive club of early 90’s ‘should have been bigger’ bands who were swept aside by the twin tsunami’s of grunge and Guns ‘n Roses. They weathered the perfect storm of not being from Seattle and being particularly tricky to pigeon hole, their ‘Metallica meets The Beatles’ sound and quirky outlook putting them out there in a field of one.

But now, 17 years after their last album, the original line up have reformed and released the really rather good opus, ‘Long Way Back To The Moon’, which can, hopefully, now be listened to and appreciated on it’s own merits, free of any distracting megabands or youth movements. And deserve to be heard it most certainly does.

We begin, almost literally, at the beginning with ‘In The Clouds’ – the first song the band ever wrote together . We blast off into a prime slab of everything that helped define the Cowboys – big, chunky, chugging riffs, lyrical quirkiness and Beatles vocal harmonies. The “flying high in the sky” lyrics are a bit cringey but hey, it was their first song. The band also make sure to flex their collective musical muscle, the guitars roar and the bass, in particular, is pure 90’s…very Flea/Jeff Ament.

And with this the blueprint for the remainder of the album has been set. The band aren’t trying to evolve or be anything new, they’re simply giving us a scorching, shiny new Galactic Cowboys album and there’s nothing wrong with that.

There’s lots of full on riffing – chugging groove/power metal, crunching and aggressive, the guitars wrapped in barbed wire. This is not the sound of a middle aged band with a near 20 year lay-off, they’re pumped and ready to rumble, this is vital stuff. ‘Blood In My Eyes’ has hardcore attitude. ‘Zombies’ has huge mechanical bass and an industrial strength riff, the silky harmonies somehow slotting in seamlessly amid the assault – there’s an almost Wildhearts level of metal bludgeon and spot on pop sensibility…not an easy thing to pull off.

‘Amisarewas’ is a rare falter, the closest this album comes to a ballad and a tad out of place, sandwiched as it is between a brace of thrash out groove monsters. The title track, however, is a beast – again the sound of Hetfield and co. covering the Fab Four – heavy, tuneful, accomplished, psychedelic and wryly amused – which pretty much sums up the band.

The two bonus tracks may be a treat too far, giving us too much of a good thing, making things begin to sound a touch samey, although the lyrics to ‘Believing The Hype’ are particularly telling – “what a shame, they should have been so huge, where’s the recognition they deserve?”…wry observation or something more autobiographical? What is for certain is that it’s good to have Galactic Cowboys back. Quite clearly recorded live, with no ProTooling, this is an organic treat, chock full of a little bit of everything but never being anything less than a great GC album. Let’s hope that this time around they get the recognition they deserve and have their moment in the sun. 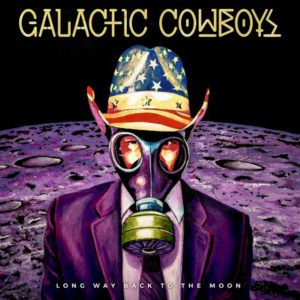