Allan isn’t sure whether to pogo or headbang when this is released on 3 December 2016, so will just do both to be on the safe side…

If you like fuzz, and you like punk attitude, then this is the band for you. You might have got an idea from the band’s name that they’re going to use a lot of fuzz, but it’s only the drums that don’t use fuzz, and they’re really just there to batter the beat home over the fuzzy basslines.

Referring to themselves as a ‘fuzzapocalypse’ seems appropriate – sonically, it’s a wall of fuzzed-up fuzz-rock. Musically, though, it’s not entirely the traditional stoner fuzz-rock fayre – they’re actually a far more punk-oriented band on the first half of the EP, at least.

First half? Yes, this EP is a sort of dyad, as it turns out. Half way through, the tonality switches more firmly into the psychedelic regions of fuzz-rock, with judicious use of wah pedals and delay creeping in, culminating in the meandering ‘Black Dread’.

However, even the introduction of some Hammond Organ in the closing track never really takes away the overriding simplicity of the album as a whole. There’s nothing complex or multi-layered or even subtle about proceedings, here. It’s wall-to-wall fuzz, whether delivered with punk-rock attitude in the first half, or slowed down into the stoner-inspired trip of the finale.

It’s an interesting little EP, and one that shows a lot of promise. If I’m being picky, I think it would likely benefit from some better production to tighten things up a little, and bring the groove forward a touch to where it can really start to drive things along. 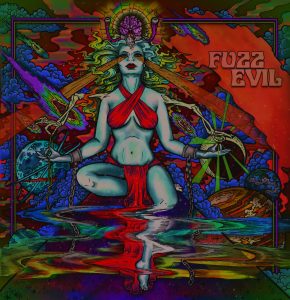