Worship at the inlet to iniquity…

Pitched as “one of the best-kept secrets in black metal” (aren’t they all?), Mexican duo Funereus have been worshipping at the inlet to iniquity (or the exit of evil if you like) since 2008. And it shows. With a production that’s a cut above the usual recorded-in-a-bog fare that is usually shat out of the underworld, the sound of the album is raw and still possesses all the filth required of any such album.

With an arsenal of trem-picked riffs and chord progressions to provide an array of shades within the dark atmospherics, there’s much more to this album than just the usual few standout tracks. Where opener ‘Unhallowed Tomb’ and ‘Return of the Old Goat’ are fuelled by Venom- and Bathory-styled riffing and ‘Below the Horns of Blasphemy’ is a relentless blast of trem-picked riffs, closer ‘Umbra Atrox’ slows the pace and allows the band space to explore a broader dynamic range.

Whether blasting like a bastard, subtly shifting the tone from unremitting evil to skilfully sinister or dropping the tempo for full on menace, there’s no bullshit with the tracks. Going straight for the cold and bleakly aggressive, each track is about as straightforward as you can get. And so while the hordes of the underworld spew out countless demos of questionable quality and continue to make their unending claims to be trve kvlt black metal, Funerus are doing it. Recommended. 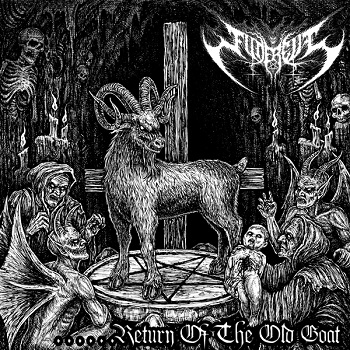