Paul Castles finds From The Vastland’s Iranian/Nordic cocktail a toxic treat, courtesy of Immortal Frost Productions  and released on September 26, 2016

You don’t have to a be a graduate of the Norwegian black metal scene to appreciate the Scandi flames that burn with almost frightening ferocity in From The Vastland’s latest full length release. What is perhaps a little less obvious is the discovery that FTV began life as a solo project in Iran under the name of Sorg Innkallelse. When vocalist Sina set his sights on a new Nordic life he began to assemble likeminded folk around him to help create From The Vastland, releasing their debut album Darkness vs Light, The Perpetual Battle in 2011. This is the band’s fourth album and Sina has created Chamrosh with a little support from like-minded sympathisers from the likes of Keep of Kalessin, Myrkskog, 1349 and Gorgoroth.

The first of the seven tracks is ‘Wizarsh’ a corrosive soul-burning opener that spits out vitriol at every turn. After a scything introduction the tempo develops into a thudding beat although it’s not blackened thrash by any means. It’s more menacing and chilling with drummer Spektre (Horizon Ablaze/Harm) providing a resounding platform from which From The Vastland can spread their diseased mantras. A mid-song respite helps refocus dizzied brains before gradually the dark juices start to flow once again set against a riff sharp enough to cut a Sunday roast. For an opening number it’s a superbly mastered composition bustling with layers each taking the track in a different direction and all proving as interesting as each other.

The mood actually slows further on ‘The Malkusan Witch’ with its apocalyptic forebodings in which all light is lost, replaced by thunder, coldness and dark clouds. Sina’s rasping vocals work perfectly within this sublime spellbinder and ‘Kresaspa & Seven Daevas’ follows in the same vein, sustained shrilled sonic sweeps, sporadic blastbeat breakouts, a riff that pulls you in like a magnet helping to sustain the raw hunger of the sound. Title track ‘Chamrosh’ is dominated by a rumblestrip of a drumbeat that probably has Spektre pleading for mercy such is its velocity but then From The Vastland deviate with a deathly haunting voice bringing the blasphemer barbs to a brief halt before things again get whipped up into a frenzy.

The Nordic narcissists are seemingly able to conjure up these surging Satanic firestorms at will although even by their standards ‘Saurva, Demon Of Hunger’ is full on earth splitting annihilation with Sina spitting and snarling his way through the song like a rabid dog. After more of the same with ‘I & My Serpents’ the mood swings for the closing composition ‘Mardazma’. A slow build-up, more melodic and less angry, although this being From The Vastland you know the peace can’t last for long and once the bloodied blastbeats start puncturing holes in the wall and Sina commences his deathly cries the gates of Hell are rocking on their hinges.

I’m not sure if Tehran is twinned with Trondheim, but on the strength of this scorching release the two cities at least share something in common thanks to From The Vastland. 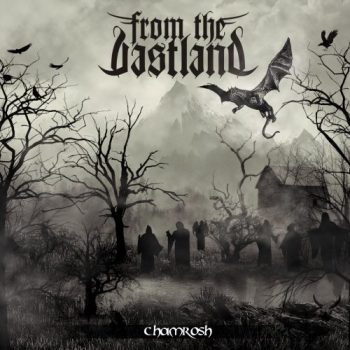