To the depths of the ocean

Paul ‘up periscope’ Castles journeys to the depths of the ocean with From The Bogs of Aughiska’s remarkable new EP, Fenian Ram, out today on Apocalyptic Witchcraft Records

When you spend half your time covering the often murky world of extreme metal you do get used to witnessing the occasional strange sight on stage. One notable example was a couple of years ago when I caught underground Irish duo From the Bogs of Aughiska performing at Scruffy Murphy’s in Birmingham.

This two-man project from North Clare featured no singing, scarcely anything that might so glibly be recognised as ‘a tune’ that you could hang your hat on and zero dialogue with the audience.

A flickering faltering mono screen showed everything from random images of craggy weatherworn old men through to hopping bunnies skipping through a field. Oh yes, and the two guys who didn’t so much as mutter a single word throughout their hostile performance also wore balaclavas throughout. The audio attack, which is pretty much what it felt like at the time, was essentially a distorted ambient drone that was monotonous, hypnotic and oppressive.

If memory serves, you could count the number of people on one hand who faced up to this attritional barrage and not all of those lasted the duration. I of course loved it!

So the duo’s new EP, Fenian Ram is well received in these parts and lo and behold it actually features some vocals, albeit not ones that would be identified as ‘singing’ in the traditional sense.

Ireland lies at the epoch of everything that From the Bogs of Aughiska do. While the bleak and barren mountain ranges of their homeland inspire much of their material, the inspiration behind this new EP is slightly less obvious.

Fenian Ram is a kind of homage to Liscannor-born engineering genius John P Holland, who, as I’m sure you’ll all know, is the man who invented the submarine.

Not content to mark its release with the now almost expected ‘launch party’ the duo have timed it to coincide with the ‘RoadBurren Fleadh’, a one-day festival that they are actually curating that takes place in The Burren Storehouse at the Roadside Tavern in Lisdoonvarna, County Clare this evening (30 April). Not just a music fest, the one-dayer will also carry some short documentaries on the independent Irish music scene from film maker John Mulvaney.

As the RoadBurren Fleadh is in their hometown – and as they’re organising the whole event – From The Bogs of Aughiska have taken the not entirely surprising liberty of making themselves the headline act. Good on ‘em!

So those fortunate to be there this evening will no doubt be treated to the Fenian Ram itself. Being based around an underwater machine is prescient as the gently manoeuvring drone can best be described as five minutes of the kind of noise that whales make when communicating with family and friends from the depths.

The bewitching magic of Fenian Ram arrives half way through its 10-minute journey when some soft and engaging Sean-nós style vocals provided by guest vocalist Stíofán De Roister (of Irish folk outfit Celtachor) add an ethereal edge to the mildly intoxicating sonic flow as we get to learn a little about JP Holland and his underwater marvel.

Sean-nós is the traditional Gallic singing style that stretches back in time with different Irish counties having their own unique style relating to local dialect, mainly in the west and south of the country.

Most commonly, Sean-nós, is used for songs and passages that relate to sadness, laments, often a death.

On Fenian Ram Stíofán De Roister sings poignantly about JP Holland, ‘silent as the waves was he, much like the man himself’. It is haunting and hypnotic in equal measure as the gently undulating drone continues throughout.

The second part of this two-track EP, continues to recall the aquatic pioneer, with a reworking of the poignant ‘Ballad Of John Philip Holland’ by the Co Clare singer and tin whistle genius Micho Russell

Unconventional in the extreme, but absolutely absorbing in its honesty and simplicity. 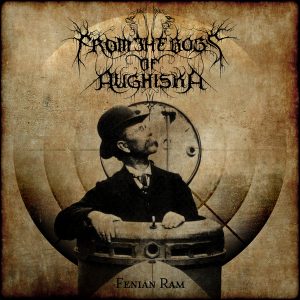