I’ve written before of what a good thing these packages of bands can be, not only giving the punters better value for money, but also perhaps giving some bands more exposure than they might have had under other circumstances. The three bands on the original line-up, French writer and multi-instrumentalist Franck Carducci, Italian band The Barock Project and a new UK band, Ghost Community, may not be that well-known outside hardcore Prog circles, but I would have hoped the VFM at least would entice the Midlands Prog fans to the Zephyr in Leamington, after a summer when gigs like this have been pretty thin on the ground.

Sadly, shortly before this four date UK tour was due to commence, The Barock Project had to pull out when Luca Zabbini, the band’s founder and keyboard player had to go into hospital, and so Franck Carducci’s singer, Mary Reynaud filled in with a brief acoustic set of four songs. She has a very attractive voice, sometimes reminiscent of Alison Krause, which was fitting as a couple of her songs were from her days in a bluegrass band, and she’s also a good guitar player. Considering she was singing in a second language, her lyrics were very smart and expressive and all in all, this was a very engaging set.

Ghost Community are a collaboration formed by bassist Matthew Cohen following the sad demise of The Reasoning; one of the jewels of the UK Prog crown in the last few years. The band are currently in the throes of recording their first album, and these were their debut gigs. After a dramatic intro tape the band opened with their title song, ‘Ghost Community’. First impressions are that the band are still a work in progress, although they were impressively tight for a band playing only its fourth gig and performing such ambitious music. 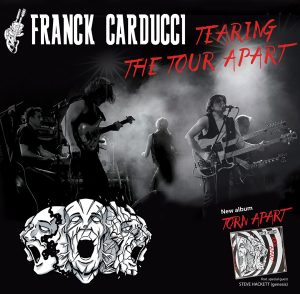 Singer John Paul Vaughan has a voice that reminds you of Doogie White, and although the sound got a bit muddy in the second song, ‘Rise Up’, this was an impressive performance by someone who is probably comparatively unknown to a lot of people, while guitarist Simon Rodgers and keyboard player Moray Mcdonald will be familiar to UK prog fans from their times in Also Eden and Godsticks, respectively. It helps that in Matt Cohen and drummer Jake Bradford-Sharp, the band has a rhythm section that has played together for a few years and comprises two of the best and most underrated musicians on the scene.

The set was only three songs long, the two opening songs both being seven minutes plus, and the final song, ‘Cycle of Life’, being a near twenty minute piece. It has an overtly prog opening, but overall, this is more of a hard rock band than The Reasoning or the other bands the various members have been in, there were definite hints of Deep Purple in some of the instrumental passages, particularly in McDonald’s keyboards. Although it’s often disconcerting to be exposed to a chunk of brand new music in this sort of setting, and it’s likely that the songs will be a lot tauter and more concise when the band’s debut album emerges, this was a really promising introduction to a new band.

French multi instrumentalist Franck Carducci is, to be blunt, not that well-known in this country, despite having played with a slew of big names in the genre, including Steve Hackett. I hope, at least on this showing, that word will get round, because on tonight’s evidence he certainly deserves a wider audience. The first thing that struck this reviewer is that the six-piece band wants to put on a show, even in the comparatively modest confines of the Zephyr Lounge, and the band have some very ambitious ideas. They entered the stage in a cloud of smoke, and with some of the band wearing masks, which at first did seem a little over the top, but as it turned out, it was typical of how the band tries to add a visual element to their music, and not letting the less than spacious stage in the Zephyr Lounge inhibit them.

At one point, Mary Reynaud left the stage for a spot of interpretive dance to accompany the music box like keyboard segment of ‘Artificial Paradise’, as well as trying to get the crowd involved in some of the backing vocals.

Initially it was obvious how much they are influenced by the British bands of the 70s, with elements of Floyd, Genesis and Yes in there, but there were also interesting elements of American pomp-rock acts like Kansas and Styx. In one song, ‘Mr. Hyde and Dr. Jeckyll, there were even suggestions of Deep Purple and Rainbow, which was emphasised (deliberately?) with a little bit of ‘Highway Star’ in the keyboard solo, although things got a little more overtly Prog after that, when it seemed we were about to be treated to a digderidoo duet, although Mary eventually only used it as a prop, while Carducci, who had played bass for most of the set re-emerged with that most prog of instruments, a double neck guitar. There was also a segment of the song ‘A Brief Passage Of Time’ when Carducci explained they were trying to project an impression of music in the future, although to these ears it sounded more of a combination of Floyd’s electronic experiments and Hawkwind.

As well as promoting Carducci’s latest album, Torn Apart, there was also some new material, including ‘Artificial Paradises’, which is always a good thing, but if I have a criticism, it’s that the band do wear their influences on their collective sleeves a little too obviously. The concluding song in the main set, ‘Last Oddity’, had a middle section straight out of Floyd’s ‘Echoes’ followed by ‘Supper’s Ready’, but this is often offset by their sense of invention, shown when the encore, ‘Alice’s Eerie Dream’ transformed into a jubilant funk workout, and there was time for another song, as the members of Ghost Community entered the stage for a surprisingly tight run through of Zep’s ‘Rock and Roll’, with guitarists exchanging instruments and Matt Cohen playing along on a bedpan.

Considering there was a lot of unfamiliar music in the evening’s entertainment, this was a really enjoyable gig, made more so by how hard each band worked to make it so, despite a crowd that can best be described as disappointing, despite the best efforts of the promoters and the bands. Next time either Ghost Community or Franck Carducci come your way, it would be well worth checking them out.