Flirtatious Prog…….OMG could this be a new sub genre? Well the Franck Carducci band tantalised those present tonight with a very teasing performance as they brought their Rock ‘N’ Roll Circus to town. This group of zany French musicians were looking to demonstrate the weight and breadth of their work to a healthy sized audience. With influences ranging from Floyd to Zeppelin to Bowie to Alice Cooper it looked like being an evening of rambunctious music from the Best Overseas Band as voted by the Classic Rock Society membership in 2017.

Young Turks Hey Jester began proceedings with their take on surreal experimental fuzz rock. These former students of Kidderminster College are evolving as a power rock three piece and the set incorporated a mixture of various different genres with a heavy hint of Muse. This was particularly evident in the Matt Bellamy like performance of Mirron Webb, on lead vocals and guitar, whose combination of fretboard noodling and intense vocal arias tweaked the style from bullish rock to artful compelling spacey numbers. Standout moments were the song about aliens ‘Extraterrestrial Love’ and ‘Pepper Spray’. In typical rock star tradition it was great to see Webb throw out a few plectrums towards the end before meekly announcing that he hoped he hadn’t hit someone in the eye. Practice will make perfect and let’s hope these promising young guys get a chance to throw out many more plectrums in the future. 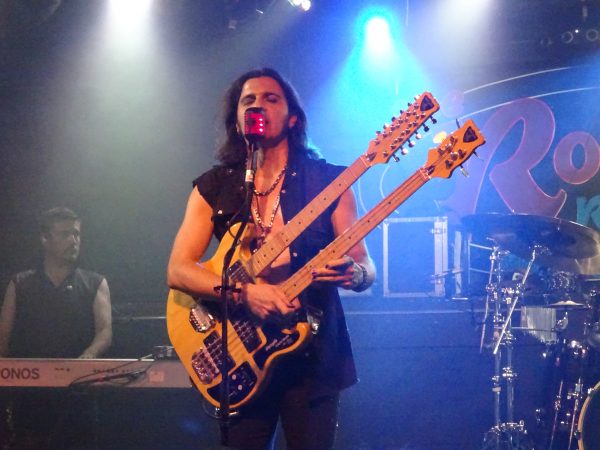 It was now time to be immersed into the colourful and flamboyant world of the Franck Carducci band. With the rest of the group launching into ‘Slave to Rock N Roll’ the master of ceremonies Franck Carducci made his entrance and boy did he look the part. Wearing a purple sequinned jacket, Stetson and giant rock star style shades he was the epitome of what every 70’s glam rock star should look like. This opening number was full of humour and self derision with Mary Reynaud slavishly playing the part of the ultimate groupie as she combined backing vocals with lustful movements towards the main man. Whilst the start had been more classic rock in vein we were soon heading off into progressive territory with the unreleased science fiction epic ‘The After Effect’. Gentle keyboards from Olivier Castan were soon put to bed as the crescendo built up like a heavyweight boxer pummelling the punching bag before the lights dimmed mid song as the spooky sounds of the theremin echoed from the stage with Reynaud performing a form of gyrating lap dance around the antenna of the instrument.

Parading throughout the gig a 12 string guitar neck that has been added to a bass guitar Carducci certainly had his work cut out during the evening but above everything else he comes across as a real nice guy who just loves his music. It is no wonder Steve Hackett was so impressed he agreed to be his mentor and play on the last album. He just seems to have the quirky charisma that is required in this challenging era for pulling in a crowd for a live event. 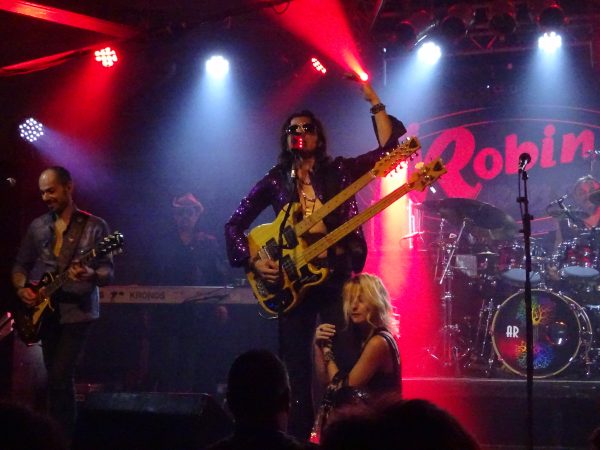 Visually speaking the centrepiece of the show is when Reynaud takes centre stage with illuminated wings to sing ‘The Angel’. Swirling around in a blaze of fairy lights she delivered a vocal performance that would rouse even the hardest heart. It is no wonder Carducci announced humorously that half the audience normally leave after this spellbinding piece. Of course no one was going to exit tonight midway through such an entertaining evening.

Trusted sidekicks Christophe Obadia and Steve Marsala on guitars were kicking like the proverbial mule all night with the former passing as a good resemblance for Phil Collen should he ever have aspirations for joining a Def Leppard tribute act. They strode around the stage delivering everything from hard driving rocking solos to dream like Genesis/Floyd type passages. 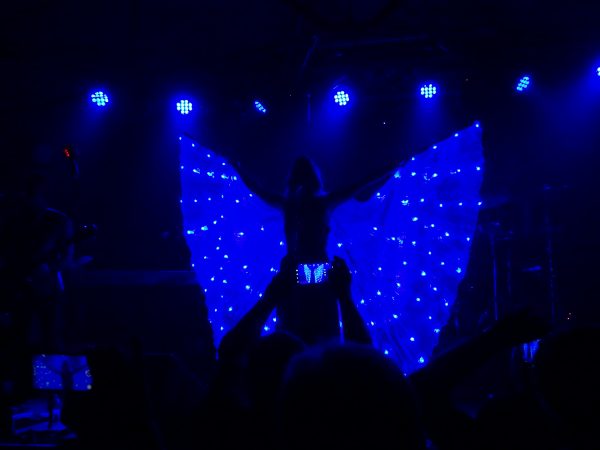 Now diversity is always welcomed and they went truly unplugged when all the band came stage front to sing an uplifting acapella version of ‘On the Road to Nowhere’ without the use of any microphones. Making sure everyone could hear clearly, Carducci encouraged all to move forward to enjoy the song about the Woodstock generation, at the same time as thanking all for coming out on a Sunday evening to listen to real live music….”even the mistakes”. It provided a harsh reminder that there are too many artists performing who currently rely on backing samples and pre-recorded vocals.

Resplendent in his mad-hatters headgear Carducci, in the true style of a prog band, announced the last number 45 minutes before the real end of the show. Having already treated all to a belly dance, it was finally time for Reynaud to take up the mantle of Alice in Wonderland, who has been turned into a hooker for the set closer ‘Alice’s Eerie Dream’. This sprawling 14 minute number allowed the true magic of this mesmerising group to totally shine through whilst a promiscuous Alice flaunted her wares. She even ended up having a dual with a didgeridoo, as she was chased around the audience by the inflated cheeks of Obadia.

Hats off to everyone who attended tonight because they witnessed a real party. If this had been a Hollywood movie it would have been classed as a blockbuster. Now spread the news to make sure there are even more there next time to witness a band who take you to a place with no borders. Oh and let’s hope they managed to catch their 3.30am ferry from Dover!!!

Setlist:-
Slave to Rock ‘N’ Roll
The After Effect
Achilles
The Angel
The Quind/Journey Through The Mind/A Brief Tale of Time/The Last Oddity
On the Road to Nowhere
Torn Apart
Alice’s Eerie Dream