Perhaps best known as two thirds of touring band From The Jam (formed in 2007 as a way to keep the music of The Jam alive), bassist Bruce Foxton and guitarist/vocalist Russell Hastings also have a long history of collaborating in the studio. Following in the footsteps of previous albums Smash The Clock and Back In The Room, their third full-length, The Butterfly Effect, finds them riding a wave on confidence and at the top of their game.

Like many of us in the midst of the Covid pandemic, Bruce and Russell found themselves reflecting on the past whilst simultaneously pondering the future, and it’s this dichotomy that largely influences The Butterfly Effect. That aesthetic is best exemplified by opening track ‘Electronic Lover’, a song that powers forward with a muscular, punchy riff which is tempered by backward masked guitars that speak of a swirling ‘60s psychedelia. It’s an interesting tension of opposites which tugs the listener in two directions, and this constant push and pull will be a theme running through the album. They say that if a butterfly flaps its wings in one part of the world it will cause a tsunami in another, and in a similar fashion the themes introduced on ‘Electronic Lover’ will recur on The Butterfly Effect. This makes for a cohesive listen, and best experienced in one sitting to fully appreciate its ebb and flow.

In juxtaposition to the stomping ‘Electronic Lover’ the following ‘Feet Off The Ground’ is light and airy with Andrew Fairelough’s keys cascading like summer rain and Russell’s vocals floating as if a leaf caught on a breeze. Bruce’s thumping bass gives the track plenty of bottom end, while a lithe beat makes the perfect foil for the whimsical, searching lyricism. ‘Lula’ was the first single to be lifted from the album, and even a cursory spin should tell you why. Awash with keys and soaked with sublime saxophone, it comes liberally infused with melody, and sometimes It’s best not to over-analyse music and concede that ‘Lula’ is just a great, great, great song.

The Butterfly Effect is an album that tries on various clothes from the buttoned-down power pop of ‘Circles’ (which, full of catchy lyrics and gnarly guitar work, is sure to ignite crowds up and down the nation) to ‘Time On Your Side’ a homage to Motown and Stax that should have all but the infirm up and grooving. As the album reaches its conclusion, we arrive at three tracks which wrap themselves up in autumnal shades and take on a contemplative tone. The Quintessentially English ‘Walking With Me’ is coloured with rustic reds, burnt yellows and earthy browns and perfectly captures that magical moment betwixt wake and slumber. That dreamlike state makes the musical explosion that is album closer ‘Anything You Want’ all the more inflammable, and not since Slade’s ‘Cum On Feel The Noize’ have I heard a track fizz and sparkle with such panache. However, it has a Beatle-esque surprise in store which brings the curtain down in fine style.

This is an album that acknowledges Foxton’s past (its title could reference ‘The Butterfly Collector’, B-side of 1979 ‘Strange Town’, and their album Sound Affects) but it also finds Foxton & Hastings facing the future, and The Butterfly Effect is a record that can stand proudly as one of 2022’s best releases. 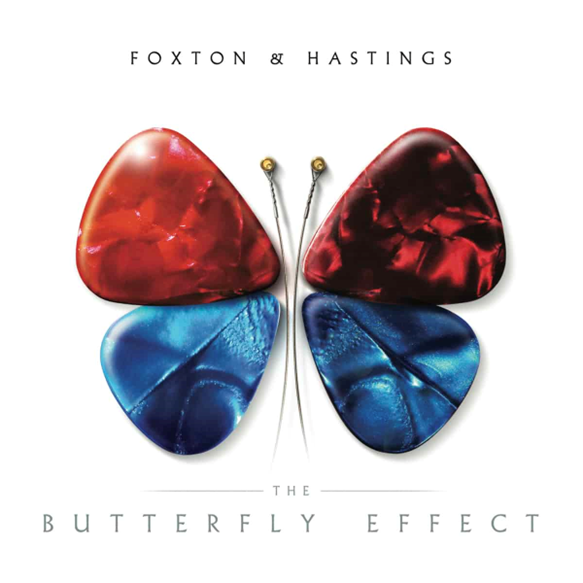