With a bunch of releases from Pennsylvania’s Forever Plagued Records recently reviewed (here), we thought it was about time we had a look at a couple more. To check out more from Forever Plagued Records, you can visit their website or check out their roster on Soundcloud or Bandcamp. In the meantime though, from Greece, we have Septuagint and their long-time-in-the-making debut, Negative Void Trinity, and from Sweden’s Ormgard comes a limited release of their album Ormblot. Expect grimness.

Seven years in the making, Negative Void Trinity is as dark, atmospheric, and dense as the band’s sinister vision. While ‘Devotion to the Redeemer’ makes clear the band’s leanings – both religious and musical – it is the four ‘Psalm’s where this vision is truly made flesh. Slow-paced and laced with contorted guitar work, the depth to ‘Psalm I’ is immense, the sense of being drawn away from the world and further into theirs near-tangible. With ‘Psalm II’ increasing the tempo, the barren landscape is broadened with variations in tempo and dynamics, it’s the intense up-tempo savagery of ‘Psalm III’ that burns most fiercely, the black smoke left in its wake enhancing the concentrated hate of the slower but by no means less intense ‘Psalm IV’. From the riffs through the structures and the atmospherics right down into the belly of the beast whence resides the wrath that fires the band and their music, the debut release from Greece’s Septuagint (previously Declaration: Holocaust) is orthodox black metal through and through. And though Septuagint may well be working within its confines, they’re damned good at it. 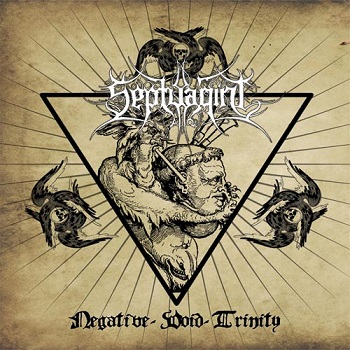 Cold, dense, and isolating, abandon hope all ye who enter here. Black metal meets dark ambient in a dark alley and kick the shit out of each other. And you with it. Sweden’s Ormgard – the one-man project of Orm, once imprisoned for church burning – are adept at creating atmospheres that are as texturally rich as they are void of blind optimism. While the two ambient instrumentals, the opening title track and ‘Dödskröning’, have a mystical and ice cold aura about them, the remaining four tracks are ruthless and uncompromising. With reverb-drenched vocals shrieking their torment from beneath the abyss, the throb of drums rumbling somewhere in the near distance, and riffs carving their melodic wrath into the album’s deeply entrenched despair, Ormblot is a harrowing experience that deserves much attention in order to fully grasp its essence. It may wear thin here and there, but once you have succumbed to its bleak beauty, there’s no way out.

Licensed from Scythe Of Death Productions in Sweden for a specially packaged case-wrapped digi-CD, Forever Plagued are limiting this release to 1000 copies.