Now this is a real discovery by the good people of Eagle Rock. Deep in a murky vault somewhere they’ve unearthed a full performance from 1978 by the original line-up of Foreigner. Youthful, hungry – they play their entire debut album plus a few extras and it’s a joy to behold.

From the moment they step onto the stage of London’s legendary, long gone Rainbow theatre the energy levels and professionalism never flag. Shrouded in dry ice, they launch into ‘Long, Long Way From Home’. It rocks, it rolls and it’s about as 70’s as it gets – white jeans, baseball t-shirts, sax solos, Foreigner exist in their own little like-punk-never-happened bubble. And why not, when you’ve got songs this good you don’t need to make token nods in any directions.

Once comfortable and bathed in the approval of the crowd, they start to flex their muscles. Lou Gramm, constantly chewing gum, is in fine voice -powerful, soulful and sassy, it’s a testament to Mick Jones songwriting and leadership that they’ve managed to survive and thrive without him all these years.

And let’s not forget Mr.Jones. Almost unrecognisable from today’s Cushelle koala lookalike, he plays throughout with flair and restraint. Make no mistake, there are solos, quite a lot of them, but they never swamp the songs. He also says hello to his mother (who is in the audience) giving the show a warm, homecoming feeling.

And on they go, with little fanfare or drama they bang out one great song after another. Hits such as ‘Cold As Ice’ are peeled out mid-set, that’s how newborn Foreigner were, they weren’t yet aware what a hit they had on their hands. And speaking of hits, we get first airings of ‘Hot Blooded’ and ‘Double Vision’ from their second, as yet unreleased album, although, judging by the crowds response to them, they must have know they were on to a good thing.

Things get proggy with a 12 minute reading of ‘Starrider’. It’s an epic 70’s time capsule. From it’s folky Tull-esque intro we head into an extended flute solo courtesy of ex-King Crimson man Ian McDonald. Gramm wisely heads offstage while flute leads into swirling keyboards which, in turn , leads into a six-string display from Jones. Snigger ye not kids, this is how it was in the 70’s.

The bands multi instrumentalism is dazzling. Gramm handles tambourine, cowbell (!!) and, during the encores, a 2nd drum kit while Jones occasionally turns his hand to a keyboard solo and McDonald basically plays any instrument he can lay his hands on. The show ends with a drum-centric audience participation version of ‘Headknocker’, band and audience clearly having a ball.

This is a fascinating release. A chance to see Foreigner as they were just starting out into the big wide world. Rougher around the edges than later incarnations but equally thrilling. It’s just a damn fine rock show by a soon to be world conquering band. As ever with Eagle Rock, the sound and vision are faultless. Yes, it’s another live Foreigner album but, due to when it was and the line-up involved, this is damn near essential for fans. This release includes both the CD and DVD of the show. 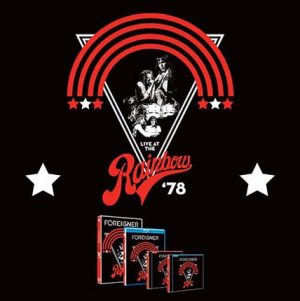