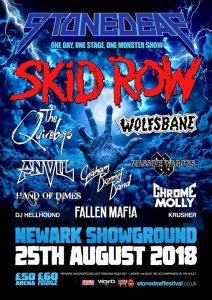 Stonedeaf Festival is a brand spanking new festival being held in the Midlands at Newark Showground, and is a one day event modelled on the old, much missed, Monsters of Rock.

It’s affordable, easy to get to and has the benefit of camping. The one day format also means that it’s not going to eat up an entire weekend in the middle of the summer.

Headlining the festival are New Jersey veterans Skid Row. In the late eighties and early nineties they were a dominant force on the rock scene and scores platinum album sales with Skid Row and 1991’s Slave To The Grind.

The band undertook their longest UK tour since the ’90s earlier this year, but unfortunately had to cut it short due to illness, and cancelling the last four dates. While plans are afoot for a new album (expected 2019), expect a trip back to the nineties featuring all the classics; ‘Slave To The Grind’, ‘Monkey Business’ ’18 & Life’ & ‘Youth Gone Wild’.

Tamworth’s finest, Wolfsbane will be guaranteed to turn in a great show as anybody who caught them on their December 17 tour will attest. If you’ve not seen the band since their late 80’s heyday then you’re in for a treat. While Blaze Bayley has continued to have a prominent recording and touring presence, Wolfsbane outings have been much more of a rarity, so it’ll be good to see and hear the original Howling Mad Shitheads line up (Blaze, Jase Edwards, Jeff Hateley & Steve Danger) tear it up.

From a rarity to a band that never seem too far from a stage, perennial tourers, and a band who can seemingly fit in on any festival bill with ease, The Quireboys will bring their brand of good time bar room swagger to Stonedeaf and whether it’s their classics of ‘7 O’Clock’ and ‘Hey You’ or their recent bluesier nuggets from last years White Trash Blues album that take your preference, they will certainly add to the party vibe of the festival.

Canadian metal survivors Anvil have been busy pounding the pavement around the world with their latest album. They’ve recently completed a UK tour, so have whetted the appetite for some. Without doubt the most pure metal band on the bill, Steve Lips Kudrow & Rob Reiner have been keeping the faith since the early ’80s with their reliable and dynamic metal. Expect a heavy dose of early slabs of steel with ‘Metal On Metal’, ‘March Of The Crabs’, and ‘Running’ mixed in with more recent skull crushing anthems such as ‘Daggers & Rum’ and ‘Bitch In The Box’, all delivered with manic grins and dildo guitar solos.

Graham Bonnet has been enjoying a recent revival touring and recording both with his own band and as part of the Michael Schenker Fest, whilst it’s difficult to keep up with the number of projects that he’s involved with recently. His latest album, The Book marked a return to form. Expect to hear songs from Bonnet’s varied career, taking in the Rainbow (Since You’ve Been Gone) and Schenker (Desert Song) classics along side his solo material (Night Games).

From legends to new bands carving out a name for themselves; Massive Wagons  have won over many fans of their traditional hard rock music through constant touring throughout the UK. By no means a new band, their hard work has started to pay off with them securing a deal with Earache Records in 2017 and gaining airplay with the release of the stand alone single tribute to Rick Parfitt, ‘Back To The Stack’. By the time of the festival, their fifth full length release, Full Nelson, will have hit the shelves, so expect to hear some new songs. If you’ve not seen Massive Wagons live yet, they’re bound to win you over.

Following the theme of early nineties favourites, many will recall the band Skin. Skin’s frontman Nev MacDonald has been heading up Hand Of Dimes for the past couple of years which also features his ex-Kooga bandmate Neil Garland on keyboards. The new band Hand Of Dimes is soulful melodic rock which packs a serious punch. With the powerful and emotional vocal drive which has become Nev MacDonald’s unmistakable trademark they blend electric and acoustic material with a wide range of influences from Free to Zeppelin. Strong melodic songs with lyrical weight are underpinned with a more blues influenced style than either Skin or Kooga.

Leicester based hard rockers Chrome Molly may have gone through some changes since their first inception back in the early eighties, but they are still fronted by Steve Hawkins and also feature original bassist Nic Wastell. Since reforming in 2009, they have released the Toby Jepson (Little Angels) produced album Gunpowder Diplomancy and 2017’s Hoodoo Voodoo. Recent years have seen them supporting Graham Bonnet, Toseland & Black Star Riders and a number of festival appearances including Hard Rock Hell and Wacken. Stonedeaf will be the latest to add to that list.

Newcastle’s Fallen Mafia get the job of opening the festival. The female fronted four piece are an ideal band to complement the line up. Heavily influenced by the likes of Motley Crue, Skid Row, and Poison their latest EP, Asylum, hints at a broader set of influences entering the mix.

Tickets are available at the following link