Formed in Phoenix, Arizona in 1981 (under the moniker Paradox) Flotsam And Jetsam were pivotal in shaping what became the classic thrash metal sound. However, as with most pioneers they were usurped by latecomers who refined the template for mass consumption. Rolling with every punch a fickle music can throw Flotsam And Jetsam are true rock n’ roll survivors and their fourteenth album Blood In The Water evidences a band who’re still vital and reaching for the gold ring.

Typical of the fire that burns within the Flotsam camp opening cut ‘Blood In The Water’ doesn’t waste time on niceties or fancy introductions. A thunderous drum roll and an earth shaking bass rumble heralds the bands arrival and then they’re off, a squadron of Lancaster Bombers to deliver a deadly payload. It’s an incendiary sound with drums detonating like a series of depth charges and guitars fracturing in all directions like phosphorous flares. Thankfully, time hasn’t diluted the band’s rage and the title track is a neck-snapping, foot-on-monitor, horns-held-high thrash fest. Erik “AK” Knutson (sole original member) has a voice that’s matured like oak aged whiskey and he confidently stamps his mark on proceedings and adds an air of authority.

With barely a pause for breath ‘Burn The Sky’ follows and is akin to sharks in a frenzy with each band member lashing out and causing maximum carnage. If, like me, you associate albums with certain colours then Blood In The Water is a dark red hue; it’s the soundtrack to a world perishing in flames, a global apocalypse in which only the strong survive. But Flotsam And Jetsam aren’t all pure bludgeon and ‘Brace For Impact’ adds some acoustic guitars mid-song which only serves as a foil to highlight the more brutal passages which bookend the track. It’s on ‘Walls’ that guitarists Steve Conley and Michael Gilbert come into their own riffing in tandem to create a huge sound which towers over the listener like some huge brutalist structure. their laurels either. Blood In The Water sounds like classic thrash and they don’t come more classic than ‘Wicked Hour’, a song that can hold it’s own with anything that the genre has produced. I admire bands who give fans exactly what they want (artists who constantly change styles suggests a weakness of spirit) and this album will certainly please Flotsam’s legions of fans. Featuring some powerhouse drumming from Ken K Mary (Alice Cooper/Accept) ‘Too Many Lives’ is the musical equivalent of a rockfall while the following ‘Grey Dragon’ finds “AK” sandblasting the listeners skin with some fine, fiery vocals. The penultimate ‘Undone’ perfectly marries groove and aggression before ‘Seven Seconds ‘Til The End Of The World’ ticks like the Doomsday Clock and brings things to a suitably explosive conclusion.

Forty years is a long time in any business, let alone the full on, crazy world of thrash metal but Captain “AK” has steered the good ship Flotsam And Jetsam on a steady course through choppy waters and Blood In The Water finds the band bloodied…but unbowed. 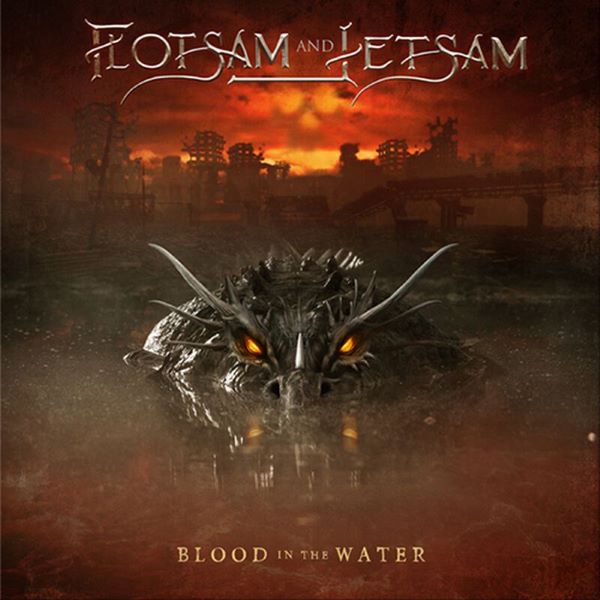