There’s something about traditional Irish music that lends itself well to being fused with punk rock. Ever since The Pogues burst onto the scene with Red Roses For Me in 1984, Celtic punk has been an irresistible proposition. Formed in 1997, Flogging Molly brought the genre, dragging and screaming, into the twentieth-century, and they’ve remained one of the scene’s most beloved bands. With no signs of slowing down, the band are about the release their seventh studio album, Anthem, and it stands as a career best,

Opening with the one-two punch of ‘These Time Have Got Me Drinking/Tripping Up The Stairs’, Anthem gets off to the best of possible starts, and after a brief a cappella from vocalist Dave King things explode into life with an irresistibly epileptic jig. Powered forth by an unwieldy drumbeat, over which Dave lays his whisky-aged croak, this opener encapsulates all that’s good about rowdy music, be it metal, punk, or whatever label you want to put on it. One thing is for certain; if you need an album to liven up a Friday night, or a proven cure for depression, then Anthem’s for you. With barely a pause for breath, ‘A Song Of Liberty’ follows hot on its heels, and if it doesn’t get you shaking your tush, I suggest a new set of legs.

Prior to his forming Flogging Molly, Dave King was a member of heavy metal band Fastway (in the classic line-up featuring ‘Fast’ Eddie Clark and Jerry Shirley) and while it might be hard for the casual listener to reconcile the two bands, they both share a similar energy. That vivaciousness seeps through almost every note of Anthem, and no more so than on ‘The Croppy Boy ‘98’. It swings like a sea shanty, and just when you think things can get any more rowdy then Flogging Molly unleash the amphetamine fuelled ‘This Road Of Mine’. It all adds up to a raucous listen, so I suggest you strap yourself in and enjoy the ride.

With a touch of Dropkick Murphy’s styled Oi!, ‘Lead The Way’ is sure to transfer well to the live environment (as will most of this album) and you can almost see 12,000 fists pumping the air and a multitude of voices singing along. It is not until the penultimate ‘These Are The Days’ that we get a breather or sorts, as the band finally take their foot of the accelerator and allow things to cruise for a short while. That laid back, reflective vibe continues on final track ‘The Parting Wave’, it is as if the band have reached their destination and are taking stock of their journey. If these two tracks had been inserted earlier on the album, it’d have made for a more rounded listen, but in the overview of Flogging Molly’s career, it makes perfect sense.

Revisiting their roots Flogging Molly recorded Anthem in a mere 14 days, and while it is far from sloppy, it has an urgency not heard since their early releases. Welcome back, guys! 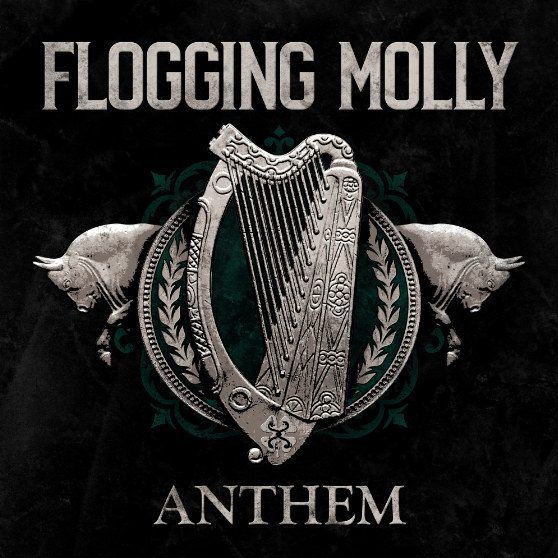