Okay, let’s do the ‘recap/history/brief biography’ bit first: formed 2007; after an interesting demo in 2007 and two tracks on a split release in 2008, debut album Oracles appears in 2009 and makes a significant impact due to the band’s technical and classical bents; 2010’s Mafia EP sees the band’s idiosyncratic sound sharpening; 2011 sophomore album Agony is an outstanding work that is as intense and deftly-crafted as it is grand and majestic; late 2013 and in the huge shadow of its predecessor, Labyrinth is released to much acclaim – deservedly so; 2016 and the Italian technical death/classical virtuosos are back with album number four, King, and a huge wardrobe budget for their NSFW video to ‘Cold as Perfection’ (above).

Now, let’s do the ‘listening to whilst musing upon the album’ bit: the orchestral sounds of war open ‘Marche Royal’ and the dramatic tone of the album unfurls. Ooh, this is going to be serious, deadly serious and make no mistake. Woe betide those that dare crack a smile at the King’s earnestness! With ‘In Aeternum’ and ‘Healing Through War’, machine gun-drumming, industrial strength riffs, angry vocals, and manic orchestral flourishes that manoeuvre in the heaving darkness are upon us in two intricate and intense tracks that demonstrates exactly how far Fleshgod Apocalypse’s dementia has proceeded these past three years. And as if on cue, out comes the harpsichord for ‘The Fool’, a track that blasts along at ludicrous speed for thirty or so seconds before slowing to ridiculous speed for a full on piano-led death metal attack.

Next we’ll have some of what we’ll refer to as ‘thoughtful reflection on what we’ve heard thus far and wondering where they could possibly go next’: hitherto (I like that word), Fleshgod Apocalypse have been cranked to eleven with the occasional dip to ten, maybe even nine before returning to full on for more of the maniacally classically crushing death metal. ‘Cold as Perfection’, in all its intense and dramatically intense drama brings a touch of the opera with a gorgeous female vocal to accompany the flight-of-the-bumblebee riffs. Running out of steam, perhaps? Nope. Looks like we’ll be pinned to the wall for a while longer.

Okay, on to the ‘listening even more intently than before to see how far they can push it before it collapses’ bit: the riffs ripping and squealing, the drums pummelling, the vocals grim and grizzly, ‘Mitra’ continues the tearing of a new one in a direct death metal assault, the classical bit saved for the operatic ‘Paramour (Die Leidenschaft Bringt Leiden)’ with just a piano and a female vocalist – singing in German, no less! – to deliver an emotionally dynamic piece that, along with the instrumental title track that closes the album, are oh-so-very-not-like-at-all the rest of this album. ‘And The Vulture Beholds’ is back up to eleven as the band throw more dramatic symphonic stabs and flourishes into the pandemonium before breaking down to a melodic guitar solo mid-track before the track soon spreads its wings and heads high into the heavens. ‘Gravity’ simply crushes it with down-tempo chugging riffs and deathly growls decorated with some twinkly piano and a melodic guitar solo and stands out as one of the album’s best. Another of the album’s best is the very next track, ‘A Million Deaths’, quickly followed by ‘Syphilis’, another great track. No, this hasn’t collapsed at all, has it?

Now, finally to the ‘considering one’s notes so far and wrapping it up’ bit: Self-indulgence is far from a bad thing as it has produced some exquisite works of art and Fleshgod Apocalypse have managed once more to maintain, for the most part, that balance between indulgence and creativity to great effect. Though this is a highly intelligent piece of work that is incredibly well-crafted, well-executed and well-produced, sometimes it feels too clever, too squeaky clean and too precise for its own good. But it cannot be doubted that Fleshgod Apocalypse have put their heart into all that they have produced since their inception and each release has seen them push deeper and deeper into both extreme metal and classical music and merge the two with astonishing results. With King, it’s no different and again, they have excelled themselves. 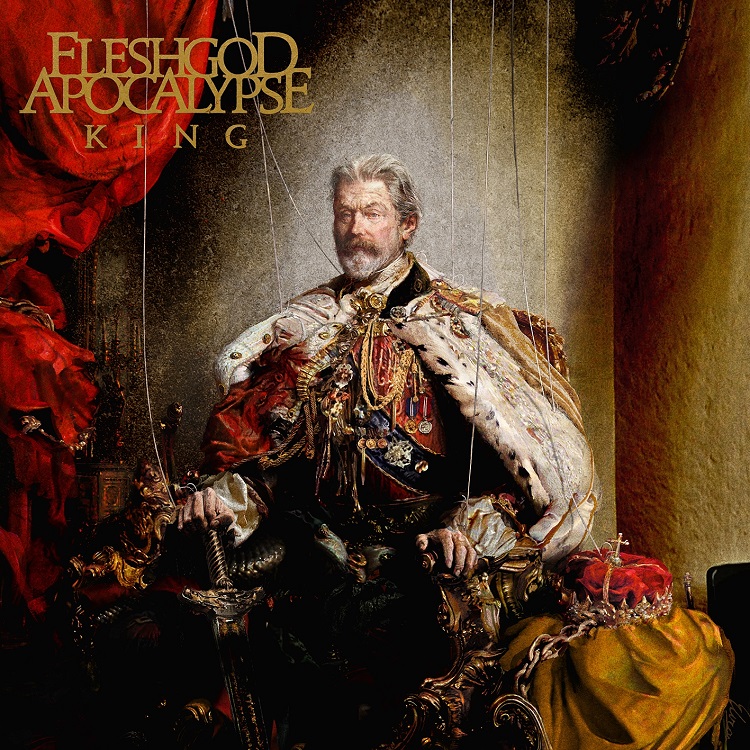