It has been 10 months since Fires That Divide last performed as a band supporting Diamond Head at the Robin last year. That show was exceptional and made a massive impression on the crowd and will have no doubt gained them new fans that have been eager to see them perform again. Tonight was that opportunity.

Tonight Fires that Divide are performing as a 3 piece since they announced the departure of their long term bass player with lead guitarist Steven now taking up residence on the bass guitar. This could prove to be very significant gig for the band.

Unexpectedly opening with new song ‘of of the of’, lead vocalist/guitarist Kirk’s guitar riffs are titanic from the off, shaking the venue to its core. The new line up is already looking well rounded with Steven looking as comfortable on the bass as he did playing guitar previously.

The energy and enthusiasm of ‘First point of call’ is perfectly preformed with Kirk giving everything to the crowd and the drum parts are ferocious and are rounded off nicely by the perfectly placed bass parts.

Switching things up, ‘No hidden scars’ shows that the band have put a lot of effort and time into getting ready for this gig with bassist Steven making sure that he utilises every part of stage at Katie’s tonight throwing all his energy into this performance. Kirk’s vocals are raw and his piercing screams resonate around the room.

Raw and effective, ‘Two Count’ offers a feel good vibe that combines effortless but striking riffs. The passion in Kirk’s performance has really hit home tonight showcasing his vocal range and ability to formulate dynamic guitar riffs. Drummer Marc has been flawless all night and, surprisingly, has not even broken a sweat in this oven-baked room.

The band finishes up in a hot and sweaty room closing with heavy riffs and throbbing drums with the crowd wanting more. Tonight saw Fires That Divide make a triumphant and invigorating return proving that they are an exceptional live act. 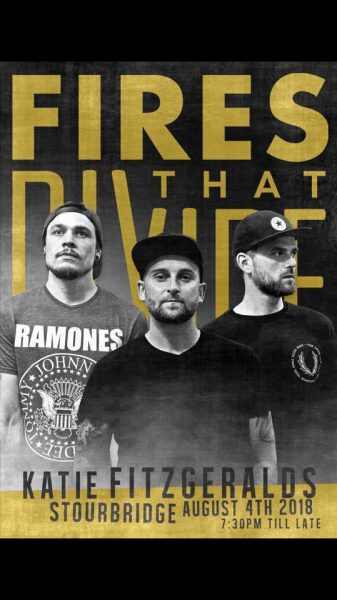