2022 Scottish Album Of The Year award-winner & 2022 Mercury Prize shortlisted pianist & composer Fergus McCreadie, one of the most exciting young talents out of Glasgow and out of the new UK jazz scene, will kick-off his extensive new sixteen-date UK tour (presented by Music-Net) next week in Sheffield with live shows running through until mid-March 2023.

His Fergus McCreadie Trio are set to play the following dates;

Tickets for all dates are on sale now via https://www.fergusmccreadie.co.uk/tour

Fergus McCreadie’s music is an innovative blend of jazz and Scottish traditional music, with compositions designed to take the listener on an auditory journey of Scotland. Depicting scenes from the Western Isles to the East Neuk of Fife, the music evokes the landscapes from which it takes its inspiration. Fergus is a complete and well-rounded musician, a passionate communicator and consummate performer, a composer of elegant, nuanced and captivating music as well as a pianist and improviser of exceptional ability and originality.

Fergus McCreadie burst onto the national scene with his self-released debut album Turas in 2018. Rooted in a Scottish folk tradition and expressing advanced rhythmical flair, the album sparked a wake of interest from global promoters and industry, collecting Album of the Year at the Parliamentary And Scottish Jazz Awards and being shortlisted for the cross-genre Scottish Album of the Year Award 2019. In 2018 he was a BBC Jazz Musician of the Year Finalist. 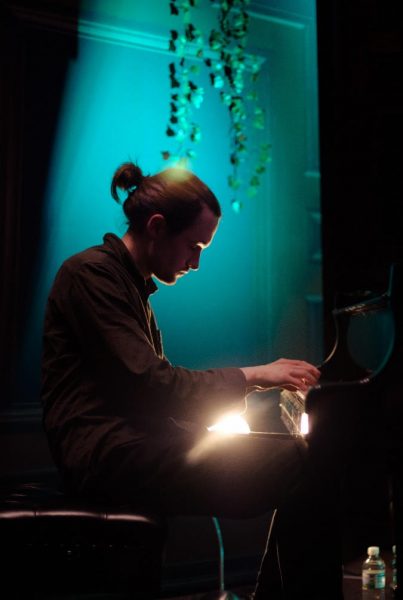 Released on Edition Records to instant critical acclaim, his third and latest album Forest Floor (2022) topped the UK Jazz & Blues Chart, prompting sold-out performances at Edinburgh’s Queen’s Hall and Love Supreme this summer. Fergus is the only non-classical musician to be selected as a 2022 BBC New Generation Artist.

Forest Floor, its artwork and aesthetic, develops the themes of Fergus’s repertoire. Whilst his second album Cairn (2021), focussed on the permanence and beauty of Scottish stone, Fergus felt that this new album had a greater earthiness to it, illustrated by the changes the seasons produce on the forest floor, a perception that fed into the concept for the new work. The connection to Fergus’ locality, the nature and landscapes of Scotland, provides his music with huge appeal that goes beyond jazz and music.

As well as scooping the 2022 Scottish Album Of The Year award, Forest Floor was additionally shortlisted for this year’s prestigious Mercury Prize, as well Jazz FM Album Of The Year (McCreadie was also recently named Jazz FM’s 2022 Best Instrumentalist Of The Year).

With his trio, featuring long term cohorts David Bowden and Stephen Henderson, Fergus McCreadie encompasses a rare freshness of sound in this well-trodden format, reminiscent of the originality and personality with which the likes of The Bad Plus and EST emerged almost two decades ago. In a vastly changed era since then, Fergus & his trio, with their profoundly mesmerising and compelling music, look set to evoke similar trajectories in developing a global audience. They certainly have the necessary instrumental command, communication and originality.