Described as Grunge/Metal by many, the 5 piece Rock Band from Leicestershire with a hint of South Africa are busy recording their second album and have decided to give everyone a taster !!

2012 saw RESIN playing many venues in the UK supporting bands such as DR & THE MEDICS, VOODOO SIX, SLAM CARTEL, INTERNAL CONFLICT, SPIRYTUS, MORDECAI, to name but a few. Receiving regular airtime on radio stations around the world and multiple acoustic BBC sessions, RESIN rounded off 2012 to a capacity crowd at the “EMBRACE THE FALL” album launch party.

With the album now on sale, 2013 became a very busy year for the band. Behind the scenes new songs were being put together already, plenty of gigs were being played as always, and the highlight of the year for RESIN was being invited to play BLOODSTOCK FESTIVAL on the Jagermeister stage and the crowd really got into the acoustic side of Resin!

This year, RESIN have released their first video; an acoustic track titled ‘BESKADIG’ from the debut album which is sung in Afrikaans which has proved to be very popular with their fans. The band are now in the studio and recording the follow up album which will be a massive step up from the self-produced debut. The first single “ BURN “ to be released 1ST August. Having recently won the final in the West Midlands heat of Metal 2 The Masses which will see them playing BLOODSTOCK FESTIVAL 2014. Not only on the NEWBLOOD stage but also doing an acoustic set after being invited to play the JAGERMEISTER stage for a second year running

The single being released “BURN” was inspired by a tv documentary about teenage prostitution and follows one young girls battles with balancing her dreams with the reality of her life , quite often the set closer when playing live and a firm favourite for those that are already fans of the band it seemed fitting to put this one out first recorded at CM Studios in Coventry and produced by Simon Cliffe (Beholder, Aonia ) 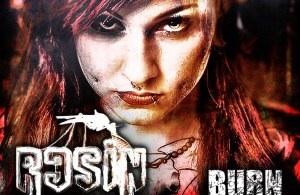