Evil Scarecrow have two agendas; to entertain, and to thrill

For those that are unaware of their stigma, Evil Scarecrow are a five piece metal band from Nottingham and have a doctor, princess and ringmaster amongst their ranks, add this to their unusual on-stage dress up/antics and Evil Scarecrow might just be the most unusual band in the East Midlands. But are the band more than just 4 men (and a princess) that like to dress up and play rock music? Absolutely.

Galactic Hunt is the band’s first album with the current member line-up and while affiliates may have changed since the bands last record sixty six minutes to midnight, the heart and soul of the band has remained, this heart and soul I’m referring to is a knack for crafting the kind of metal that makes you want to either dance, laugh, scream, break things or do all four at the same time.

‘Rise’ is where the new record really kicks off and is set to be a fan favourite, those who have already been captivated by Evil Scarecrow’s musicianship are in for a treat and the song itself is a signal that somehow, four years away from a recording studio has created absolutely no rust, the mix of face melting riffs doubled together with Dr Rabid Hell’s scathing vocals gives the track the kind of power to chew an audience up, and spit them right back out.

With following tracks ‘Space Dementia’ and ‘Galacticus’ both following in the same vein, there might be a feeling that Evil Scarecrow have left behind their humour and instead decided to head for a straight up metal record, however these fears are quickly washed away with ‘Crabulon’.

“He uses his hard-drive to impregnate the crustations eggs” are the kind of insane yet at the same time humorous lyrics that have given Evil Scarecrow such an infectious presence over the years and has taken them to places like the Bloodstock Festival main stage. ‘Crabulon’ is an example that Dr Rabid Hell and co still have a personality, and boy do we love it.

It is blatantly clear that Evil Scarecrow have two agendas; to entertain, and to thrill. Throughout the rest of the record they manage to do both, with songs like ‘Frankingstein’ and ‘Flight of the Dragons’ certain to get any crowd, anywhere singing and screaming and tracks like ‘Book of Doom’ and ‘Dance of the Cyclops’ showing off the bands soft light hearted, yet still incredibly metal centre.

Robo-insemination, overdue library books and a dancing Cyclops are just three of the several truly eyebrow raising subjects you will come across during Galactic Hunt, however this takes nothing away from an album that has been brilliantly crafted with a personality that beams out as clear as any sunrise. Evil Scarecrow are strange, and we love them for it. 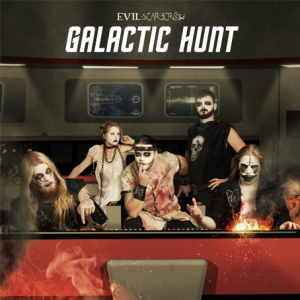