Recent years have seen Finland’s Erja Lyytinen go from being an earnest performer in the blues rock tradition, with a particular penchant for slide guitar in the manner of Elmore James to dipping in and out of other musical forms, from straight-down-the-line AOR to progressive rock with jazzier elements, touching on several other musical forms along the way. There’s she’s never quite stayed with one or other aspect, albeit there’s been a steady quality improvement along the way.

With Waiting For The Daylight she seems to have joined the dots, bringing what some might consider disparate music forms together, in what’s possibly her most accomplished album yet.

Opening track ‘Bad Seed’ comes in on a wave of guitar and a chunky blue rock grove but within a hair’s breadth it’s chinking down on funk chords, goes trip-hopping towards pop before smashing down hard in the chorus. Throughout there come some adept guitar phrases, both slide and of the art rock shred variety, more keenly heard are her vocals – When originally singing the blues her Finnish accent tended to be quite pronounced, as time and styles have gone by that’s evolved; here it’s a classy weapon in her arsenal, not least the additional use of her own shrieking backing vocals. The verses are a come-on for an ex-lover, and while he may be the bad seed of the song’s title, following guitars that buzz like bees round a honey pot her declaration to “step into my flower garden” hardly shies away from what’s on offer.

Having taken in aspects of Satriani and Vai during the opening number’s soloing, Lyytinen doesn’t hold back with the following ‘Last Girl’ adding some Iron Maiden style power metal as entry point. More so even than on the previous track, she merges funky heavy guitars with a wider sugared-po crush of melody, hat she also features a semi-psychedelic chord breakdown in the manner of some vintage Jack Bruce tracks and it all fits together impressively. The extended solo soloing is progressive in nature. It’s big, bouncy, and singalong in nature despite it primarily being about school bullying. ‘Run Away’ by choice of title may seem a natural follow-on, it’s bright and shiny euphoric late 90s pop at its best one moment, Bryan Adams hard rock the next, and some impressively scaled guitar work along the way.

‘Waiting For The Daylight’ pours on the heavy, coming somewhere between Coverdale/Page and Audioslave, meaning you should have a good impression of the way its big mother of a riff plays out on this one. There are also instrumental passages too, recalling the early Iron Maiden’s ballad form with guitar shredding stylisations over the top. By synchronicity, I’ve just finished reading about recent neuroscience experiments and near-death experiences, and this song touches on aspects of that.

‘Never Really Had You’ sees the lady look back to her roots in that it’s a slow blues ballad, but that’s understating the fact; there’s a big heart-breaking epic quality about it, imagine McCartney was pitching to write another Bond soundtrack. Yeah, in that ballpark. ‘Diamonds On The Road’ sees her continuing to plough the blues furrow, heavier, mid-paced mainly but speeding with some wild slide phrases getting pulled out near the end, even her vocals harmonise repeating the song title as if it were a mantra.

‘You Talk Dirty’ apparently appeared 20 years ago on her first recording. I suspect it didn’t sound half as heavy back then, though she’s acknowledged it shares similar elements to ‘Black Sabbath’s War Pigs’, though to that add some Zeppelin dynamics and musical shoots, and a vocal delivery more akin to Plant if he really had a Scandinavian war cry back in the day. Now, should you be presuming this be another come-on number it’s quite the reverse, as she’s succinctly sing: “We’re together… In your head!” A predatory stalker’s song too apt for our times, and she delivers it well.

Lyytinen has described ‘Love Bites’ as “Ray Charles song with a punky attitude” and a bit “of a Tori Amos vibe… Me, I hear the Alice Cooper band dancing all the way to Broadway, a smorgasbord cherrypicked from The Hoople album by Mott, and a grandstanding Sensational Alex Harvey Band. Yeah, this is theatrical rock in all but name, with added guitar extravaganzas, oh and she also plays violin on this one.

Mixing that McCartney with the blues thing again and in what ends up like some epic Southern rock finale where Pink Floyd’s Dave Gilmour has stepped up to take the solo, we have ‘The End of Music’ signing this album off in style.

Erja Lyytinen’s guitar playing has come on many a mile the last few years, she’s using her voice as an additional instrument not just a mouthpiece for words – albeit some are particularly laudable this time round, and with Waiting For The Daylight the various elements that are her talents and stylistic interests have come together to deliver a cohesive powerful album, that it’s hoped she’ll continue to forge ahead with in times to come. 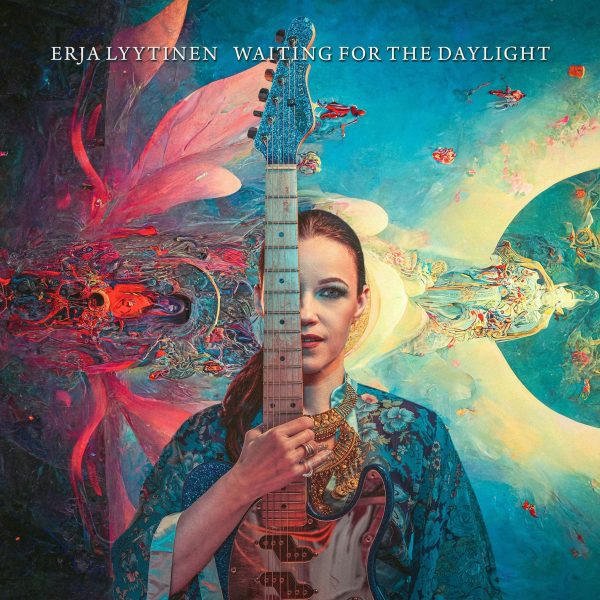