Two years of ever-rescheduled dates? The odds against this tour going ahead with the same headline and guest slot didn’t look good. Still, here we are mid-week in Blighty, smiles on our faces; covid (we are told) has been put to one side and for a few hours at least, let’s not watch Putin’s cold war public masturbatory practices. No, tonight, let the good times roll.

Danny Bryant’s always worn a suit in the photos I’ve seen, so the bloke in jeans and sweater with a guitar who stroll on catches me off guard. The Hertfordshire-born lad also appears to have shorn some weight, though he’ll make a few cracks about that later on. 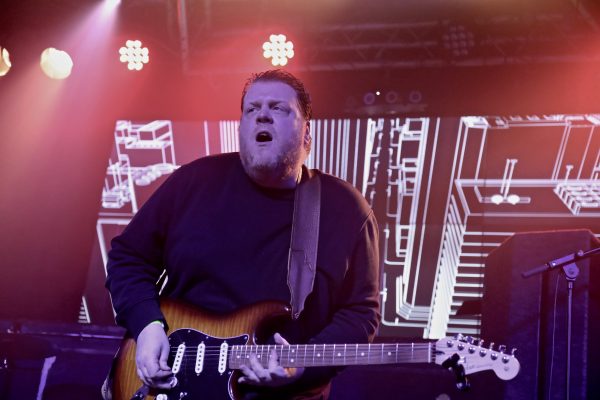 With just a rhythm section of bass and drums, who keep it deceptively simple but effective, our man pitches his guitar and launches into ‘So Excited’ – An instrumental that starts with a scathing, taught riff followed by wiry sustaining, and a turnabout of styles that incorporate deft hammer-ons, tight picking and a distinctive blues guitar sound, laying into a more centred 12 bar foundation near its conclusion. He’s also apt to prowling the stage a lot more than I expected, leaning in close and shifting back to effect controlled feedback with amp, standing stage-front, guitar neck poised over the edge bleeding out sound as he makes demonstrative faces.

Following introductions, he gives us ‘Heartbreaker’, featuring another riff played on the offensive, while the song itself rides on waves of chords, with a variety of solos thrown in for good measure. Straight in after comes a rock & roll rendition of ‘Bullfrog Blues’, a live staple for the late Rory Gallagher.

Another cover comes in the form of Jimi Hendrix’s ‘Little Wing’, soulful sustained tones are emitted as intro, but you also get the impression Bryant has also listened to others’ renditions, from Clapton during his Dominoes period to Ronnie Wood in The Faces, but still taking his own route, while vocally he emotes in a raw bruised manner, shaking his fists as he does so. 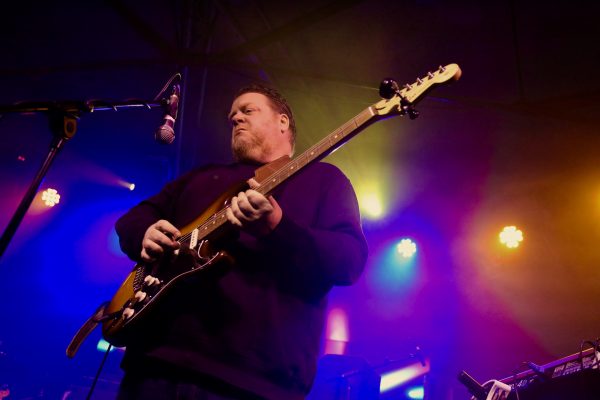 Vocally, his more recent albums have seen him focus more on their presentation, alongside his development as a songwriter. Tonight, the focus is on guitar, but while the verses aren’t overlong, they get over their intent, his natural accent somewhat endearing.

He tells us there’s merchandise available tonight, including his fitness video – But only available on Betamax. He also informs the audience he’s got a new record deal, but there’s also a best of available from his previous, and that includes ‘Last Goodbye’, wherein the aforementioned rhythm section gets to contribute their own brief solos. It’s followed by the more recent ‘Nine Lives’ performed as dirty stomping boogie, then he closes with, of all things, a ballad – It may have been another old one, possibly ‘For The Love Of Angels’, again it’s a number I recall as short of words compared to the guitar work, and he’s got his guitar set on stun with this one, the level of sustain veering towards Robin Trower level with the harsher bite of, say, Uli Jon Roth. It’s bluesy, of that there’s no doubt, even as once more he leans over the stage spilling raging lead lines before taking the tune to its climax.

“Is this the soundtrack to The Omen with sound effects added?” some of us seem to be thinking by the look on our faces as the light go down and fresh new bodies roam the stage… And a curious bunch they look indeed – There’s a bass player wearing a bobble-hat and a mask from which smoke is emitted periodically during the night, a keyboard player who looks like he’s been drafted in from a 70s jazz rock outfit, two drummers tucked in either corner one of whom is Mrs Gales, and the man himself. 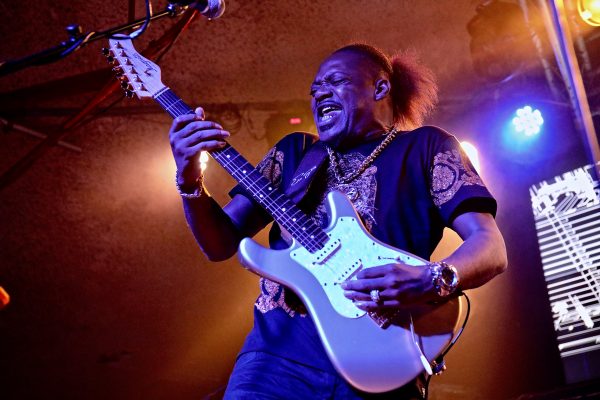 Eric is armed with a right-handed guitar he’ll play left-handed; he’s quite muscular as revealed by a black t-shirt trimmed with silver and gold, his distinctive look topped off with short raised dreadlocks held by a ponytail (or so this aging git whose idea of a haircut is his growing bald patch presumes).

With a crash of sound, it appears the PA’s gone up a couple of notches. Gales shifts through mellow arpeggios to jazzy refrains until a funky riff sets around for a while, then things speed up into a blues-tipped fret-fest that’s not afraid to wander into fusion territory. This here instrumental is ‘Smokestack Lightning’, only here and there resembling the version your grandma told you that the mighty Howlin’ Wolf sang about.

It’s an impressive opening, and, as we’ll find out, he’s not short on things to say.

His declaration that he’s happy to be here in Bilston, touring, and so able to earn a living, bears honesty alongside a sense of dignity. That he reveals covid has taken the lives of those close to him, is a mutual sense of pain too many here share. That he’s nearly six years clean of taking illegal substances we applaud, and that in thanks he’ll pour everything he’s got into his live performances we’ll get to appreciate. That he does this in the US tradition of preacher-meets-practiced-politician we’ll note is handled with earnest professionalism.

However, much as we accept this is a changing world, and that it’s okay to wear your heart on your branded t-shirt, this is chiefly a three-decades-and-counting audience so British reserve is omni-present. Touchy-feeling stuff’s hard for us but we’ll be vocal in our support of your good intentions, at least to begin with. Some 20-25 minutes spread out over a night’s performance is a bit much for some. I’m later told this has been the conversation in the gents’ toilets tonight, a time-hallowed sanctuary usually reserved for drum solos.

Better to keep such matters concise, and keep us onside, especially here in the Black Country where we’re tough as old boots. More apt to say it in a song, and he does that well, beginning with ‘You Don’t Know The Blues’ that tells of the black man’s plight in America, over a rolling beat that’s old as the hills but given a modern slow, strutting edge, then on soloing ventures out into Vai and Satriani territory, where it proves fertile.

‘Survivor’ tells a similar racial story, over a harder blues funk riff, moving into an almost psychedelic Beatles chorus that works well with the Robin’s slide projections going on over the stage. A torrent of electric guitar soundscapes gets followed by Chic-chinking chords as he asks: “How can you love what I do, but hate what I am” among the lyrics worth listening to on this one.

Most of tonight’s numbers are from Crown, his most recent album, produced by his long-time friend Joe Bonamassa, one that’s likely to be award-nominated. The studio renditions are far more reserved than the multi-directions he’ll take some of those songs tonight, though it’s apparent a number of them were been arranged on record to do just that.

The evening will see a musical crossover of sounds that incorporate modern R ‘n’ B, rap, grooving evocative funk, heavy blues rock, draw comparison to acts as diverse as ZZ top, Prince, and Lenny Kravitz, while not shying away from fusion.

It’s also worth discussing Gales’ voice. He utilises both rap and call-and-response gospel vocal elements, while his main vocal approach lies somewhere between a broader Robert Cray and Al Jarreau come his upper-register. There’s also a touch of George Benson in there, both vocally and on some of the jazz guitar runs he dashes out. 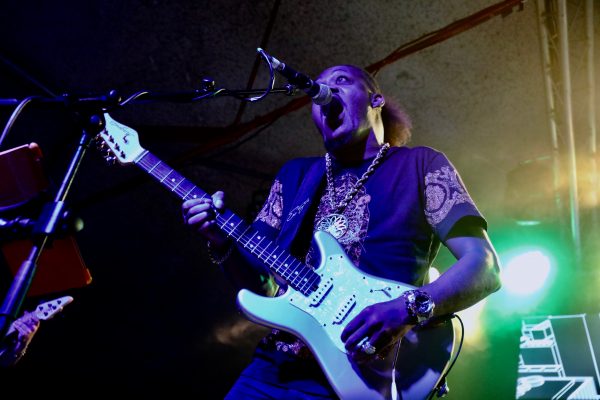 Following arpeggio chords that blur into jazzy refrains we have the stop-start funky boogie of ‘Put That Back’ with his wife, LaDonna Gales, from here-on noticeably adding backing vocals. It all grooves along well before masterclass guitar lessons have us branching into Jeff Beck styled excursions, a screech of sound then bringing us into a dreamy-prog-like chord progression, before further guitar excesses, albeit melodically so.

The long echoed electric piano solo that bubbles away as introduction to ‘Stand Up’, has a strong Return To Forever flavour about it, even when Gales joins in with blues guitar lines. It beefs up and resembles the studio version once he starts singing, but ultimately stretches beyond that musically with the jazz-scaped interplay between the musicians.

Following a lengthy introduction, ‘Take Me Just As I Am’ features LaDonna Gales on lead vocals. We’re told she’s shy but coming out of her shell each performance, and the pure voice coming through is certainly one worth hearing, however, the fact she’s still stuck in a corner behind a drum kit feels a little awkward as rather than just focus on her and appreciate her voice, we’re straining to see her. The song itself chilled soul of the kind we hear all too rarely these days.

There is humour, rapping, wafts of smoke from Smoke-face alongside a bass solo as more jazz fusion and Chic-style guitar chinking takes place and we even shift stylistically into a section that wouldn’t have been out of place on Yes’ Fragile album (seriously) that gets heavier and more into something akin to Beck’s Wired album as it races on before getting ultra-funky, with the closest approximation of style being Prince playing the blues during various sections of ‘My Own Best Friend’.

Spangly echoed Stevie Ray Vaughn-styled aplomb wails gently over a blues framework on ‘Too Close To The Fire’ and once more relates racial tensions and his own personal demons in a moving manner, between which we’re offered one fiery solo followed by a more lyrically melodied intense one that’s possibly the highlight feature in his playing tonight.

No going offstage to return for encores, the set finishes with recent album title track ‘Crown’, with synthesiser and guitar taking up the roles Gales and Bonamassa perform on record, and again the blues template is just that, with moments more akin to the Mahavishnu Orchestra blasting through. Lengthier too, we get preaching blues raps, funk-meister guitar solos, a few bars that seem to resemble some neo-art rock take on ‘Greensleeves’ and some hard-felt blues rock to ensure everyone’s beat into submission, in a good way. And with that, guitar raised above his head, white/yellow lights burning out into the audience tonight’s show concludes.

If you wanted to hear guitar tonight, The Robin 2 was the place to go. Danny Bryant may have played more than he sang, and Eric Gales talked when he could have sang and played, but as an introduction to both acts, it was an experience worthy of note.