Over the years, the Clapton/Yardbirds back catalogue has been plundered to within an inch of its life. At worst, a record label exec squeezing out the very last drops of profit before he is rebuffed by a saturated market. At best, new opportunities for rock fans/history students to get up close and personal with three major influences – beyond the Yardbirds – in the rock’n’roll timeline. Eric Clapton, of course. Jeff Beck of course. And Jimmy Page, who plays only a small role here, but a significant one. Of course.

The irony is of course that the Yardbirds’ breakout single, ‘For Your Love’ was penned by master popsong writer, Graham Gouldman, later of 10cc. The sheer poppiness of that debut single drove Clapton out of the band after only a 2 year stint. Jeff Beck joined the same week. He would add his distinctive raga rock guitar tones to the band’s follow up singles, ‘Evil Hearted You’ and ‘Heartful Of Soul’ (not featured here).

Up to that point the band had earned their widening place in the sun through live performance of blue standards, like Sonny Boy Williamson’s ‘Good Morning Little Schoolgirl’ (featured here in both studio and live versions), Billy Boy Arnold’s ‘I Wish You Would’, and their own homegrown blues homage, ‘Got To Hurry’, written by the band’s manager and “secret hero of British rock”, Georgio Gomelsky. They were on-stage staples of the burgeoning rhythm’n’blues’ clubs of the sixties. More than half the tracks here are either ‘Live At The Marquee Club’ or ‘Live At The Crawdaddy Club’.

It’s here (in both cases) that we hear the real Yardbirds. Sets jampacked with the prototype blues rock of the seventies, occasionally going off tangentially into psychedelia. The sonic quality of the live material is variable, but it’s the raw spark and uncontrolled kinetic energy of performances like these that got pulses racing.

The studio tracks on CD2 are perhaps the most interesting. ‘Choker’ and ‘Freight Loader’ feature both Jimmy Page and Eric Clapton, and ‘I Wish You Would’ and ‘Honey In Your Hips’ are two of the Yardbirds’ earliest recordings with Clapton. Noted album compiler, Bill Levinson later included the latter in his 1988 Crossroads compilation (Clapton’s bestselling boxset).

The days of uncovering lost rarities are long gone, and the content of this 2 CD package has appeared in an infinite variety of guises. But what it brings us is a vivid snapshot of sixties Britpop, and a fascinating close up of the early days of three of the world’s greatest rock guitarists. All together on 2CDs. 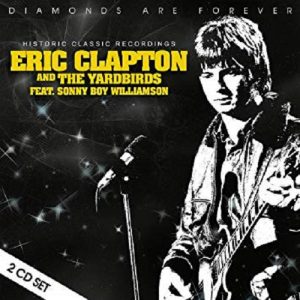 *Live At The Marquee Club

*Live At The Crawdaddy Club