Anyone who’s been to a 70th birthday party will know the score. A nice venue is booked – somewhere familiar and welcoming. The birthday boy/girl will be surrounded by loved ones and good friends. It will be friendly, relaxed…safe. There won’t be much in the way of surprises, no strippers and Jager bomb frenzies. I’ve used the word already but it bears repeating, it will be…nice.

And so it was when Eric Clapton and his select band of A list session muso’s rolled into the Albert Hall for a 7 night run back in May – his 17th residency there believe it or not and his 200th show at the esteemed venue. And it’s filmed beautifully for this release – almost becoming a character in the film itself, which, I guess, being a film about Clapton, it is!

And EC is playing it safe. He gently launches into ‘Somebody’s Knockin’ On My Door’, a erm, nice slow blues with a classy solo and some funky Hammond B3 work from Paul Carrack…yes, that Paul Carrack, he of Mike And The Mechanics and Squeeze, now firmly ensconced as a member of Clapton’s band. Indeed, both band and set list are as near-as-dammit identical to last year’s excellent ‘Planes, Trains and Eric’ documentary – a mixture of blues standards and back catalogue favourites, no deep cuts or anything too fiery.

The concert oozes by, warm, smooth and comfortable. And surprisingly enjoyable. Clapton is incapable of playing badly and his band support him faultlessly. The audience (who mostly appear to be the same age as EC) settle back in their seats and enjoy a top of the range MOR masterclass, although the abundance of hammond solos do occasionally steer us into Georgie Fame territory!

Carrack and bassist Nathan East take turns stepping up to the mike for a song each (presumably giving the bosses voice a breather) and then we’re into the seated and (even more) relaxed acoustic set. Eric’s playing is impeccable – ‘Tears In Heaven’, played with his eyes closed, is an incredibly moving moment although it is a shame that ‘Layla’ – one of the most joyous, uplifting riffs in rock, seems to be destined forevermore to be played as a jazzy shuffle.

A perfunctory ‘Wonderful Tonight’ leads us into a mid-paced, rocking ‘Crossroads’ (although the jump-cut editing is a tad irritating) and then we are into that riff…’Cocaine’.

Now, anyone who made it through the 80’s will know that EC and the AH has other connotations – namely corporate boxes, astronomical ticket prices and be suited, ostentatious yuppies…and they’re back! Honestly, check out the frankly appalling dancing at 2:18 in the video at the top of this here review! Give me a sweaty stage diver crash landing on my head any day! Anyway, EC shuts his eyes to the horror and plays a blinder.

Clapton always plays at his best when he’s challenged – check out ‘Stormy Monday’ from the Cream reunion gig or anything from the incredible 2006/7 tour where the brilliant Derek Trucks was on rhythm, recreating Duane Allmans guitar parts! Clapton is incendiary, reminding us where his reputation comes from! You always hope, with an EC gig for that moment. That moment when the spark ignites and he reaches for the stratosphere. Unfortunately, it doesn’t happen here, he’s firmly in his comfort zone, in fine voice and flicking calmly through his back pages. And this visual reminder is the equivalent of a pipe and slippers, or a onesie and a log fire – warm, fuzzy and, despite the nagging feeling that you should be wanting something wilder, this is still…nice. 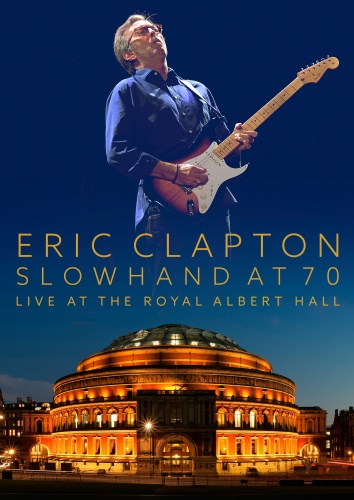 Somebody’s Knockin’ On My Door

Key To The Highway

You Are So Beautiful

I Shot The Sheriff

Nobody Knows When You’re Down And Out