The Irish tend to be a nation of travellers, leaving home to make their way in the world, make their name. But The Emerald Isle exerts quite a pull – wherever you go, it’s always home, always in your soul. You can’t escape it, you always go back, be it physically or spiritually. So too with the blues – there is some sort of connection with Ireland, it produces genuine bluesmen…Morrison, Gallagher and Moore to name but three. Whatever else you play, the blues eventually reappears, it’s in the blood.

Another name to add to the list is Eric Bell, guitarist with Them and founder of Thin Lizzy. His self-imposed musical exile has been broken with,er..’Exile’ – his first studio album in six years and yes, there is a definite re-connection and re-affirmation with all things Celtic and bluesy.

Bell has made this album on his own terms – recorded in a converted barn in Cheshire with Joe Oakes on drums and Bell playing everything else. You can hear it, but not in a good way. The rhythm tracks are slightly dry. Sedate, mellow and flat, lacking the depth and vibe of a band playing together, feeding off each other. Any spontaneity is lost and that’s a shame as Bell has a damn fine touring band.

But that’s only half the story. What saves this album are the songs and Bell’s prowess as a lead guitarist. Songs that could have been pedestrian and dull are rescued by effortless, relaxed guitar heroics. There is lyrical country string bending, inventive double-tracked rock leads, Jeff Beck style whammy bar work, stinging Rockabilly style wig-outs and cinemascope epic rock bluster.

The aforementioned songs, although impeccably written, are very traditional in framework and structure. From Celtic Country to 12 bar blues, nocturnal jazz shuffles and Lizzy-esque rockers – but they do act as good, solid springboards for the six-string fireworks.

The lyrics address universal themes – ageing, fatherhood, as well as moments of autobiographical introspection. The title track, in particular, is more about the words than what’s being played and ‘Thank God’ is a confessional, addressing those good ‘ole country themes of redemption and gettin’ by. Most moving of all is ‘Song For Gary’ – Bell’s spoken word tribute to his fellow Belfast and Lizzy brother in arms, Mr. Moore. Respect, mortality, fondly recalled memories, it’s all there. As is a dazzling, fiery solo (which, on its’ own would have been a fitting tribute) – it runs the gamut of emotions – anger, melancholy, sadness and joy and is worth the price of admission on its own.

It feels as though Bell is aiming for a bit of a Mark Knopfler vibe, the mellow elder statesman. Mature, relaxed, watching the wheels while he does his own thing. Tradition with a dash of fire, a fine well-rounded whiskey. I suggest you catch him on tour, that is where this stuff will come alive. 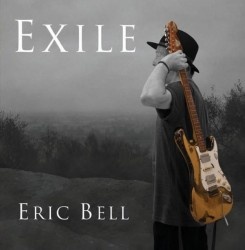