No concessions to modernity, and little looking back.

As it turns out, the band’s name was preternaturally apt, as it’s been written off several times since its inception in 1969. But it survived, usually by shape shifting through musical styles, from its early post-psyche progrock, through a flirtation with heavy metal, then bridging a 25 year gap to 2005 and 3 “comeback” rock albums. This unlikely trilogy is an object lesson in how to get that comeback right. No concessions to modernity, and little looking back. No worshipping past glories, and no hostages to contemporary musical mores.

The fluid construct of the band orbits around Cliff Jackson, founder, guitarman, vocalist, writer and only remaining Englishman in what was once a 50/50 Brit/German axis. Along with Jackson, Heinz Glass and Fritz Randow are the core of the current band.

Conceivably, Fire From The Soul is the best of the the three. Unconstrained by a generic straitjacket, the music bends and warps through a diversity of styles. The loose, freefalling ‘Fighting In The Street’ (inspired by the street battles in 2014 Hong Kong); ‘No One Can Save Me’s strutting riff, sea shanty rhythms and playful chorus, to the gorgeous pop majesty of ‘Spark To Start A Fire’. The songwriting is shit-hot, the arrangements imaginative and it’s all stitched together by Cliff Jackson’s needlesharp axework, and the obsessive’s attention to fine, textural detail.

The band’s collection of sounds from the past and present, carefully chosen, all dovetail perfectly, like finely tuned examples of the craftsman’s passion. ‘The Way it Used To Be’ would probably be the pick for melodic rock fans, channelling ‘Crazy’ era Icehouse through ‘Point Of Know Return’ Kansas – the orchestration of guitars, voices and violin is spine-tingling, extending tangentially into an extended, Beatlish middle eight, and back again.

There is no surfeit of styles here, but neither is it a journey for the fainthearted. Brace yourself for the dark, churning soundscapes of the title track, guitars spewing lurching chords while the violins dance, or the Rainbow like symphonic metal of atmospheric bonus track, ‘Love Child’, or indeed the sweet, heart stopping chord sequences of ‘Any Day’, sounding a lot like a tribute to Petty, Lynne and Harrison.

No question, Fire From The Soul is a magnificently apposite conclusion to one of the most satisfying trilogies in European rock. 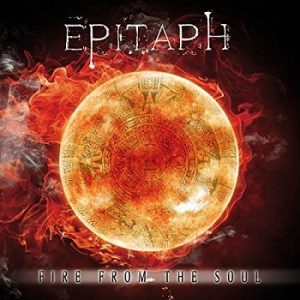