A little bit more of a good thing

A year after their last studio set, The Holographic Principle, comes another collection of new material from the Dutch symphonic metal band Epica, this time an EP, The Solace System. These new tracks are songs that were recorded during the sessions for The Holographic Principle, but didn’t make the cut, not because they weren’t as good as the ones chosen for the album, quite the opposite in some cases as it turns out, but because, in the band’s opinion, they didn’t fit the overall feel and flow of the album proper. It should also be emphasised that this isn’t a collection of outtakes and demos, these songs are fully formed, properly arranged, produced and mixed, and sound every bit as good as the album itself. Even with these tracks in hand, the band decided against making The Holographic Principle a double, but equally, these tracks were too good to be left in the archives, or, with a partial exception, to be used as B-sides or bonus tracks, so an EP was the obvious solution, the exception being ‘Immortal Melancholy’, an acoustic version of which was included on the acoustic bonus disc in the special edition of the album.

So, setting aside the reasoning behind the release, let’s turn to the music, and I’m pleased to be able to say that I can’t see any Epica fan being disappointed with ‘The Solace System’. All the ingredients are there, the thunderous riffs, the orchestration and, as ever, Simone Simons voice moving effortlessly from operatic to straightforward rock, even into gentler, almost folk territory almost with ease. The songs are also well up to the mark, and I can only imagine how difficult a decision it was to leave them off the album. Take the opener, also the title track, a typically over the top Epica production, a furious orchestral part, the choirs adding to the fury, then a storming riff. ‘Fight Your Demons’ is just as dramatic, but with added grunts from Mark Jansen adding even more drama to the atmosphere.

‘Architect of Light’ slows the pace slightly, at least in the first half of the song, with a nicely sinuous guitar riff, before the band hit the accelerator pedal for the remainder of the song. The contrast between the two halves is part of what makes this arguably the best song on the EP. ‘Wheel of Destiny’ keeps the pace up, and although the verse is quite reminiscent of Nightwish’s ‘Storytime’, it’s another fine track. ‘Immortal Melancholy’ is the track previously included on the bonus disc of ‘The Holographic Principle’, and here is given an almost Blackmore’s Night-like arrangement, with a near medieval atmosphere, and the strings do a fine job in adding to the overall feel. Epica have been known to indulge in some epic tracks, but the longest one on this EP is ‘Decoded Poetry’, weighing in at a mere six and a half minutes, and it’s the most ambitious track on the record, moving through different moods and sections. For me, it’s not the strongest track here, lacking the focus of the shorter tracks, but it still rounds off the EP on a high note.

A final word about the artwork, The Holographic Principle had a superb cover, and despite the fact that this is a cut price release, the standard for the EP is just as high. A fold out, digipak sleeve for the CD release, complete with terrific artwork and a well-illustrated booklet with full lyrics and credits, it’s pleasing that the EP package is well up to the high standards of the album.

The Holographic Principle is a fine album on its own, arguably one of Epica’s best, but The Solace System is too good to be an afterthought, and is a good companion to the original album. It’s easy to see why the band didn’t want these songs to be overlooked or forgotten, and every Epica fan should add it to their collection 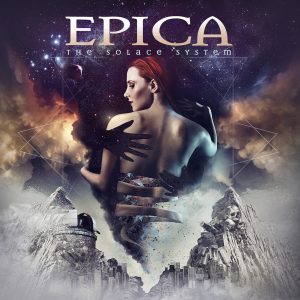