Grabbed by the Urals

Paul ‘where’s my coat’ Castles braces himself against the Siberian blast of Eoront’s latest album Another Realm, released via Code666 on June 16, 2017

Siberia has always had an imposing reputation for being a stark barren landscape, with no little hostility packed ice tight around its frozen edges. Hailing from Krasnoyarsk, well within the Siberian terrain, at least in part therefore explains this immersive album from Eoront.

The song titles speak volumes as to what channels the energy within this one hour release, it’s nature at its most forboding and right from opening track ‘The Rain’ the listener is catapulted into a sonic soundscape shorn of all things bright and beautiful.

Instead the walls of these claustrophobic corridors of sound are so thick as to be more like a labyrinth, within which only different shades of darkness exist. The inspiration behind this captivating and compellingly atmospheric Black Metal release rests with the likes of Ephemer, Brume d’Automne, Aeternus, Belenos and Fyrnask. If those names haven’t yet crossed your path yet, then try US gloom mongers Wolves In The Throne Room, while Fen and Winterfylleth offer useful reference points a little nearer to home.

Finding like-minded souls to create such tundra flattening compositions in deepest Siberia is probably no easy ask, hence Eoront starting out as a solo project five years ago. Fortunately founder and vocalist Foltath has now managed to hook up with new pals Eugene on bass, Valea on keyboard with Ephemiral Gorth taking hold of the drumsticks.

Now, after a couple of self-releases, Eoront are finally ready to wage war across wider plains thanks to a newly struck deal with progressive underground Italian record label Code666. 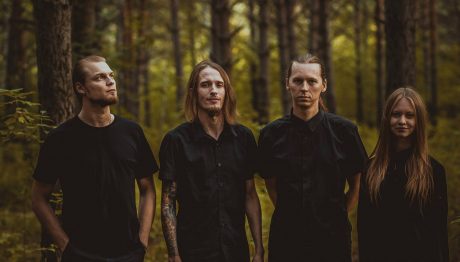 Each of the seven tracks navigates a variety of routes, altering the tempo to suit the change in mood, ‘Genesis’ carrying biblical sized surges at its angriest and then pulling back to a more resolute and restless rhythm to allow energy levels to recharge. On a song such as ‘The Glow’ Eoront explore more vivid dimensions, while the pace is still fiercely driven some fleeting shards of light are able to blend with the inherent icy underbelly.

The final two tracks both push through the 10-minute barrier, ample time for Eoront’s engaging mystical melodies to pull you under their spell. ‘Dreamcatcher’ has an almost lackadaisical dreamy feel through the early stages, Valea’s clean keyboard strokes adding a smooth symphonic sheen. Foltath’s brief but deadly yelp punctuates the mood for a split second but even when the band’s driving force starts to take up closer quarters the tempo retains that of a confident and measured beat rather than falling into an inferno of noise.

‘The Order of Light’ brings Another Realm to a more fevered finish, drums worked to exhaustion and with Foltath more forceful as the quartet take on a more demonic demeanor, as though keen to leave their mark with one final dynamic push.

Siberia probably isn’t on too many people’s holiday lists this summer. But at least an evening spent with Eoront gives you a taste of what lies within its great wilderness of dense forests, sweeping mountain ranges and frozen lakes. Best served chilled.