Paul Castles gets tangled up with Entrapment’s new offering, issued on vinyl via Doomentia Records on 15 April 2017

As some of you may be aware Through Realms Unseen was initially issued by Pulverised Records at the tail end of last year. Now released as a gatefold vinyl package for the first time – courtesy of Doomentia Records – this release from Dutch death metal marauders Entrapment merits revisiting – or indeed a first call for those who missed it first time around. Swedish-flavoured death metal this may be, but some of its more engaging moments open Through Realms Unseen up to the fans of the likes of Lamb of God.

The album is a testosterone overload with the one individual singularly responsible for this manly explosion is Michael Jonker, who is not so much the guiding light behind Entrapment as the sole light. Jonker was the original drummer with Absorbed and Massive Assault many eons ago but Entrapment has given him the freedom to show that he can harness a full musical dialogue without recourse to picking up his well battered sticks. So every note played here, across guitars and drums, is played by Jonker who of course also adds the venomous volley of vocals.

Since launching Entrapment seven years ago with the Putrefying Stench of Death demo, Jonker’s output has extended to a couple more demos, a split release (with his other band Massive Asault), an EP and a couple of albums, most recently Lamentations of the Flesh in 2014. Through Realms Unseen brings things up to date and once the pounding opener ‘Omission’ delivers a few mighty kicks to the solar plexus the uninitiated are left in no doubt as to what side of the fence Entrapment stand on – the one where the action is taking place, of course. 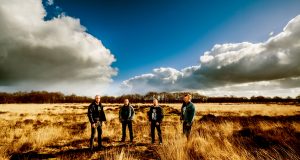 For all its ball-breaking power, ‘Omission’ is a great way to get things moving with some soaring guitars in the latter stages showing that it’s not all just about the fist-pumping hardcore outbursts. ‘The Seeker’ immediately finds its feet and blitzes along leaving a trail of flames in its slipstream, momentum only briefly lost, during a brief solo sojourn, but even that fits like a glove into the overall sound that Jonker has skillfully knitted together. The sound and pervading atmosphere is certainly in the same vein as Jonker’s Dutch compatriots Asphyx and also in places to Birmingham’s own emerging death metal stormtroopers Memoriam.

‘Static Convulsion’ is a little more even paced but carries plenty of aggression and authority with a riveting rumble caught in its midst, spiked up leads and Jonker’s growls completing the picture. ‘Withering Souls’ is another beast of a song with a hook sharp enough to hang a bear on with Jonker’s trademark drumming reaching incendiary levels as the impetus receives a sudden injection of hatred.

At times Entrapment do run the risk of losing a little of the death metal intensity. They drift off piste at times into a more prog feel, albeit, one that still swings a pretty mean sledgehammer. The album’s title track certainly isn’t the fastest either but it does contain a threatening groove capable of dislodging a filling or two, with the song given time to pause and breathe. Jonker has now assembled a live line-up to help Entrapment extend their reach beyond the walls of the studio so the Dutch deviants may be heading to a dark and murky corner near you in the future. 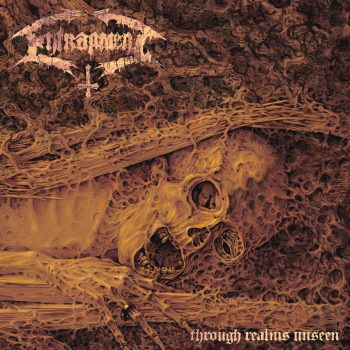