In Times is the thirteenth studio album from Norwegian veterans Enslaved. Remarkably the band’s founder Ivar Bjørnson had only just entered his teen years when he first joined musical forces with the slightly older Grutle Kjellson. Around a quarter of a century later the pair remain at the head of the Enslaved empire, alongside Cato Bekkevold (drums), Herbrand Larsen (keyboard, vocals) and Ice Dale (lead guitars). Inspired by their nation’s formidable reputation as the hostile homeland of frosty black metal the pair originally called themselves Enslaved in Rot, a name taken from a demo by legendary corpsepaint sabre rattlers Immortal. But although formed as a black metal outfit, that tag was fairly quickly shortened as they set about exploring more extreme and less obvious avenues.

The past 25 years has seen Enslaved increasingly challenge both themselves and the listener by channeling their natural aggression with complex compositions and creative riffwork that leads you on a dark and deep journey. All these qualities figure with their majestic new album In Times which can be placed alongside any of their previous dozen albums without fear or embarrassment. My initial thought when glancing at the tracklisting was had my copy missed a couple of songs off?

On the face of a six-track album is the preserve of doom bands. However, Enslaved have left nothing behind with this release and each song is a kind of massive exploration probing corners and stretching out to different musical stratospheres. The heavily layered tracks do not always speak to you on first hearing. In Times needs a little patience and persistence from the listener. But give it time and the rewards will come.

The opening salvo ‘Thurisaz Dreaming’ perfectly illustrates the many sides of Enslaved. Beginning with a hellish cocktail of screams and crashing guitars it evolves into something deeper, almost prog like at times with its extended solos and guitar duels. While the singing style of Herbrand Larsen’s is at times so clean and precise you could eat your dinner off it, it is interposed with satanic barks and death metal growls from Grutle Kjellson.

‘Building With Fire’ flickers into life with Larsen’s voice warmer than an electric blanket before Grutle’s gravel-laden diction enters with all the subtlety of a polar bear closing in on a seal pup. The song has a real sense of vivacity to it, at times scarcely recognisable as metal in the traditional sense. Not that there’s any doubt that’s where their heart is, and Enslaved instantly open up ‘One Thousand Years Of Rain’ in a destructive mood but with some brilliant interplay between the two singers, almost jousting with each other, sniping away over some guitar licks that threaten to leave a scorch mark on your carpet.

When the intricate harmonies and clever mixing is in full swing, Enslaved at times bring to mind their Scandinavian cousins Katatonia, although the former carry more vitriol and venom than the Swedes. The half-a-dozen songs each extend beyond eight minutes. The album’s title track is the longest – just over 10 minutes – and certainly one of the most intriguing. It never allows you to lose interest while the soundscapes carved into the atmosphere almost blind you with their brilliance. A chugging riff carries us along nicely in the opening phase until Grutle’s gruff barks shatter the ambience. With the shredding getting notably faster Larsen joins the fray. It ebbs and flows with seismic slams of punishing attacks somehow blending effortlessly with choral chants and dark dissonant deliveries.

For a band still to be delivering fresh imaginative material after 25 years or so should not be taken for granted. Enslaved’s musical path has rarely strayed from the top drawer and the compelling In Times is no different. Six songs?… Six of the best! The last time I caught Enslaved live was on the Cannibal Corpse/Triptykon tour a couple of years ago. Their next UK visit is in the Autumn with the Slade Rooms in Wolverhampton among the stop offs. Get it in your diary now, September 25. 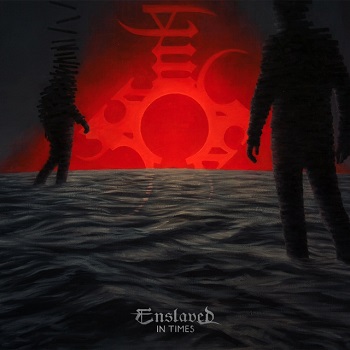