After a series of singles and some pretty intense UK touring with the likes of Bring Me The Horizon and Cancer Bats, Empress AD finally drop their debut full length via Roadrunner Records. Empress excel at bringing real levels of light and shade into their music, especially through the use of guitar effects and ambient sections in tracks. This is even more apparent with Still Life Moving Fast as it’s the first time one can immerse oneself in 47 minutes of the Reading four-piece’s textured, thoughtful progressive metal.

The first two tracks proper, ‘Invisible Conductor’ and ‘Delve Into The Retrospect’ showcase two sides of the bands approach to the album, the former is a riffier affair with an anthemic, rousing outro whereas the latter delves into the Floyd-esque side of the band: a dreamier, effects laden piece. Single ‘Deeper In Disguise’ is a stand-out track, with a classic Empress-style riff culminating in a vast, crushing rendition of the song’s title. Ollie Loring’s unmistakable vocal twang echoes across ‘On My Return’, a tumbling, expanding musical landscape with his brother Alex providing a driving bassline to push the track through the swells and recesses that progressive music can so often get bogged down in.

‘Haunted By Time’ makes a suitably creepy interlude, a down tempo drum beat interspersed with pitched percussion and manipulated feedback, somewhat an adventurous choice for a debut record of only 10 tracks. Outside of this though, the band could be at risk of sounding a little repetitive: ‘On My Return’ is in a similar style to ‘Delve Into The Retrospect’ in that it pushes out into the more clean and classically ‘prog’ side of their music. This is great but could see them repeating themselves further down the line, should they not evolve a bit more with their next record as you’d hope a band in their position would.

For a band that’s still technically in its infancy, Empress AD have a lot going for them and Still Life Moving Fast will cement them as serious contemporary contenders. Upcoming shows with Turbowolf see them hit the UK again and having just joined one of the most prestigious labels going, things can only get bigger. 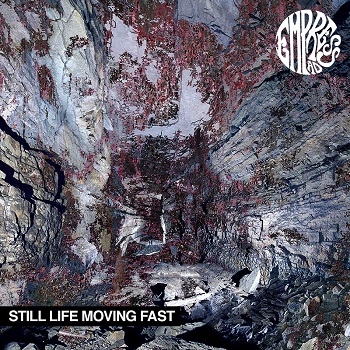