The nearest thing to heaven since 1989…

In the melodic rock firmament, Erik Martensson’s star is still in the ascendency. His song-writing and production skills have been in huge demand by many artists in the genre – Issa, Bobby Kimball, Jimi Jamison, Ammunition, Dalton to name but five. And albums by his own bands… WET and Eclipse… have met with critical acclaim even from the most hardened of AOR journalists. For fans, they are the nearest thing to heaven since 1989.

As you would expect then, Armageddonise is suitably equipped with a bunch of stadium ready, roof raising rock songs, full to the brim with naggingly familiar hooks and pulse quickening choruses… a lot like its predecessors Are You Ready To Rock and Bleed & Scream. And also like them, it barrels unstoppably through a series of songs made for a different time, expertly tailored for today’s reactionaries.

What this album lacks though, is soul. Not soul music, but music with soul. You will see dozens of reviews from the usual suspects, lauding this album, best thing since… etc etc. Each slavishly following the last, outdoing each other’s hyperbole.

And as an exercise in unpeeling the aspic, it works a treat. You can’t force fit this kind of material into the here and now but you can sell it to the willing. The explosive opener, ‘I Don’t Want To Say I’m Sorry’ unveils an immediate burst of flickering images, with the sound of Europe, Unruly Child and the occasional Coverdale inflexion taking shape before our eyes. ‘The Storm’ and ‘Love Bites’ again prove that it’s hard to touch Martensson’s ability to write tightly structured melodic rock songs, barbed with biting hooks and memorable melodies. You’ll hear loud echoes of Pete Lesperance’s signature guitar clang and chime, and maybe too you’ll hear the ghost of Marcie Free soaring through the high notes. It’s just a pity that Martensson too frequently abandons any thought of subtlety, choosing instead to pound the hooks into our head with the hammer of the AOR Gods, perhaps forgetting that histrionics are no substitute for real passion.

And although the driving, urgent ‘Caught In The Rush’ and ‘All Died Young’ go some way to capturing the vibrancy and excitement that characterises great AOR, elsewhere and too often, the tracks seem unfocussed, formulaic. Candy floss songs like ‘Stand on Your Feet’ and ‘Live Like I’m Dying’ are passing sensations, bloated by an inflated production, containing no real substance.

All that said, when Eclipse get it right, as on ‘Wide Open’, the album’s outstanding track, the results – in melodic rock terms – are genuinely awesome. If you let this song take you, you’ll find yourself mainlined into a magical world, where AOR again rules the FM airwaves, gloriously reminiscent of the genre’s most hypnotic moments. It’s such a pity then that this high water mark is devalued by some disappointingly low budget melodic rock around it. 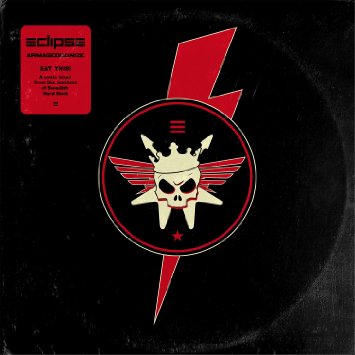