Much More Than Just A Show…

Reviewed by Brian McGowan. Released by Eagle Rock on 4 August 2017

It’s an unavoidable observation that the Eagles Of Death Metal only became widely known as the result of the terror attack in the Bataclan Theatre, November 2015. Many too have noted the irony in that band leader, Jesse Hughes has moved further to the right of the political spectrum over the years, and indeed is a noted gun fanatic.

Hard as it might be, we have to put all that to oneside as we consider the band’s live performance in Paris in February 2016, as they returned to France “to finish their live set” . . . “as a tribute to the survivors, the injured and those who lost loved ones”. The sincerity of that sentiment is not in doubt. As Hughes put it: “It’s much more than just a show”.

Probably even the casual rock and metal fan will be aware of Josh (Queens Of The Stoneage) Homme’s presence, and of Homme’s and Hughes’s disarmingly irreverent attitude toward, well, almost everything, always expressed in a borderline cheesy/knowingly redneck manner, and more often than not, aggressively infectious.

All the big songs are here on the this whopping 19 track 2 CD/22 track DVD set, with standouts – ‘I Only Want You’, ‘So Easy’, ‘Stuck In The Metal’, ‘Whorehoppin’ – from their hugely popular album Peace, Love and Death Metal (2004) getting a particularly enthusiastic welcome from the online gaming and movie aficionados in the crowd.

EODM’s garage rock, trailer park aesthetic always works well in an intimate setting, but works surprisingly well in arenas too, thanks to its pumped-up, improv structured style, and unarguably, a bunch of eminently memorable melodies. No wonder that major tracks from Death By Sexy (2006), ‘Cherry Cola’, and ‘Don’t Speak’ got picked up for use in Hollywood movies as well as Nike and Microsoft ads. These are tattooed-onto-your-memory rock songs, enjoying immediate recognition and singalong joy by the crowd. Equally, the harmless innuendo of ‘I Want You So Hard’ and ‘I Like To Move In The Night’, immoveable staples of the band’s set for the last 10 years, get welcomed like old friends by an audience who clearly identify with the band’s earthy ethos.

EODM don’t always enjoy rave reviews for their live performances. But tonight their catchy fusion of classic rock stomp and riff driven tunefulness was just what the crowd wanted, and perhaps needed, too.

The DVD/Blu-ray includes 3 “videos tracks” from the band’s gig, in October 2015, at the Teragram Ballroom in LA. These are not included on the 2CD set. As with most Eagle/Universal stuff, the sound quality is second to none and comes in a variety of stereo options. 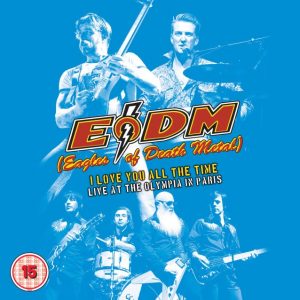