Eagle Twin’s third album will be uncaged by Southern Lord Records on 30 March 2018. Paul Castles explores whether its flight or fright.

Eagle Twin started out just over a decade ago, formed by Salt Lake City buds Gentry Densley, previously of post-hardcore/jazz icons Iceburn and Ascend (with Greg Anderson) and Tyler Smith (drums) formerly with Form Of Rocket. Over the intervening decade the pair have shared stages alongside the likes of Earth and Sunn O))) which gives you an insight into which kind of musical sphere they operate. However, that doesn’t tell the whole story, not even close.

The Thundering Heard is their third full length release and it’s considerably more animated, less austere and infinitely more accessible than the aforementioned acts. Densley’s deliciously gritty vocals light this album up, placing Eagle Twin at times in the same crusty corner as the likes of Orange Goblin and Crowbar. No strangers either to esteemed Euro haunts such as Roadburn and Desertfest, Eagle Twin forge swampland sounds that are sticky, heavy underfoot, and occasionally difficult to negotiate.

The Thundering Heard (Songs of Hoof and Horn) opens with the slow moving ‘Quanah Un Ram’ a rasping piece that stretches out for 12 minutes. It never quite hits top gear, instead a firm grip is kept on the reins, the track beginning with a rolling drumbeat that could have been lifted straight off an Indian reservation. A rhythm starts to shape out a wild plains landscape and the first sighting of Densley’s drawl is so throaty that you’re almost tempted to go and fetch him some larynx soothers. This is a laid back beginning – not to be confused with lazy – introduction to this highly enjoyable four-track release.

‘Elk Wolfv Hymn’ begins even more restrained, gently bobbing along, until after a couple of minutes a lush groove filters through like a shard of light to suddenly elevate the song into a whole new ether, more vivid and vivacious with Densley dragging his cellared tones to previously unsuspected sonic peaks. The impact is little short of blinding and Eagle Twin’s prowess really starts to resonate, especially if like me (embarrassingly), they’re a band you’ve not encountered before. 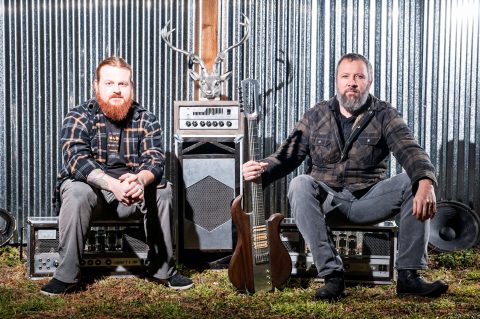 ‘Heavy Hoof’ is easily the heaviest of the four songs, a real anvil weight of a beat crashing down without restraint, the riffage rustier and less disciplined while Densley roars away like a grizzly who’s woken up with no breakfast. The grooves stomp from side to side leaving Godzilla like prints as they do so. There’s just room in which to shoehorn a few prog infused riff patterns towards the end, but again it makes for a compelling listen.

The longest track is the last of the quartet ‘Antlers Of Lightning,’ just shy of 15 minutes in length. It opens with a furball sized feedback as distorted rhythms clash menacingly. The combination of Densley’s destructive riffs alongside Smith’s constantly evolving drum patterns makes for an almighty tussle, as though the two are fighting each other whilst simultaenously working together. The range of emotions stretch as far as the eye can see, only sporadic vocals from Densley deemed necessary during the compellingly lengthy instrumental phase.

The Thundering Heard was aided in the studio by Andy Patterson, who also figures in another stunning Salt Lake City crew, Subrosa. Eagle Twin have unleashed an album with more permutations than an A-level student’s physics book. It’s absorbing stuff, an album where time and exploration will be met with fulsome rhythmic rewards.