Time for some Mind games

Paul Castles dons winter hat and gloves for a catch-up with Icelanders Dynfari, whose latest album was released by Code666 Records, on April 14 2017

Thanks to the likes of Solstafir and Árstíðir Lífsins interest in the Icelandic underground music scene has seldom been higher. Well, here’s another name to add to the list, Dynfari. To be fair though these are no mere novices, this is their fourth album. But this could be the one in which they really begin to assert their command.

The Four Doors of the Mind is filled to the brim with melancholic moments, although overall things are a bit more abrasive than the sonic spider’s web cast by Solstafir. But although the tones are harsher and the edges not quite as smooth – such as on ‘1st Door Sleep’ – further exploration of this enterprising and uplifting album reveals that there’s a lot more to Dynfari than perhaps you initially suspect. Indeed, even the jagged edges on ‘1st Door Sleep’ eventually take on a slightly less antagonistic feeling as progier elements are allowed to surface and this powerful eight-minute track develops into a massive symphonic success story of iceberg proportions.

Although a quartet now, when originally formed Dynfari consisted of just Jóhann Örn (vocals, guitars) and Jón Emil (percussion). Hjálmar (bass) and Bragi (guitar) have now been added to the ranks, allowing the band to build on notable achievements to date whilst at the same time being able to craft even grander works.

‘Sorgarefni segi eg þér‘ is a magnificent track full of spiraling guitar work, that hangs halo like over the percussive throng that ebbs and flows with real vigour. Beautifully crafted and inspirationally written, this track has more lines then an old fashioned school detention session, and they are given the freedom to weave in and out of a broad soundscape where around every corner awaits a new twist or nuance to enjoy. ‘Sorgarefni segi eg þér’ would be your worst nightmare on the Spelling Bee Challenge but nestled within this powerful album it’s more than welcome, while the richness and depth of Örn’s voice is a joy. 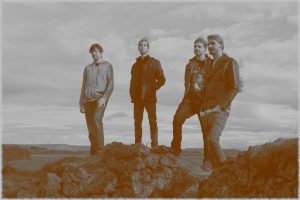 The next couple of tracks are only half the length but ‘2nd Door: Forgetting’ is another compelling composition. Ponderously paced although in no way dull or depressive, the guitars once more execute some inspired riffage that help build and then maintain the suspense like a PD James novel. ‘3rd Door: Madness’ is crafted in much the same way with the significant caveat that this time the words spoken are in English, again laid on top of a soft instrumental hum that bobs and weaves with occasional flurries of anger bursting forth like a recalcitrant foot stomping toddler.

The somnambulant ‘Sorg’ consists of a spartan cleanly picked guitar that lays down the most tender of grooves accompanied by some Icelandic mutterings which are of course wasted on me and no doubt on most of you too, with apologies to any Icelandic readers. At least on ‘3rd Door: Madness’ the purposeful prose is read in English. As the album title infers the subjects covered are those of insanity, reality and pain. But while plunging and exploring the depths to which we can all plunge it does so in a symphonic stupor in which agonized vocal cries overlap the spoken words almost as though inner demons are being repelled.

The album closes with ‘4Th Door. Death’ a monumental 14-minute finale in which the Icelanders use every drop of power and wisdom to craft a largely instrumental composition fit to lay at the feet of the Norse Gods. Hypnotic, rhythmic and compelling, there’s a thrusting energy that powers this song from start to finish.

The theme of the mind’s ability to cope with pain is the dominant theme running through this album, with Dynfari drawing inspiration in part from the theories of US fantasy writer Patrick Rothfuss. The other central figure in this demonstrative tablet of doom is early 20th century Icelandic existentialist poet Jóhann Sigurjónsson who spoke of the lamentations on human existence. Dynfari somehow amalgamate the ideas of these two men who lived a century apart. The result is captured in the album title and is reflected on the doors that open up our minds in tracks two, four, six and eight – the spiritual journeys of Sleep, Forgetting, Madness and Death.

Dynfari have managed to forge a union between these two literary wizards while still working with ancient instruments such as accordion, flute and bouzouki. Impressive artwork courtesy of the respected French artist Metaztasis, who has worked with black metal deities such as Watain and Behemoth, completes the jigsaw on The Four Doors of the Mind, an album that you’ll never tire of. 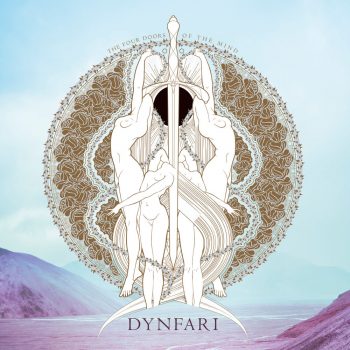