Occasionally, just occasionally, as a reviewer you hit a huge brick wall made of your own limitations. Such is the case with French band, Dronte. Dronte are, for the record, a seven-piece who look, for all the world, like an acoustic jazz ensemble – acoustic guitar, sax, vibes etc. But, Dronte, for all their radical mixing of genres (classical, trip-hop, post-rock, noise) are, emphatically, metal. Very metal. You completely forget that you are listening to an acoustic ensemble, or as they refer to themselves, “post metal acoustique”.

Musically the album is obviously, different. Creative, daring, yet following a fairly set pattern. Songs ebb and flow in a post rock style, quiet, ambient moments are replaced by barrages of thrash dynamics and free jazz squealing. We’ll cover this in more detail in a moment.

But now…the wall. As Mr. Lydon once sagely noted, “anger is an energy”. Indeed it is, it crosses barriers, timezones. It’s universal, leapfrogging language obstacles…to an extent. Despite not knowing a word of French, you can tell that Dronte are mightily miffed, vexed, you might even go so far as to say they’re a bit pissed off. But, I have no idea about what. Each and every song on this album is chock full of spoken rants. Furious rants, many issues are being addressed in the most robust and loquacious of terms. The lyrics are clearly heartfelt – full of fury and passion and absolutely central to these songs. Which, clearly, is unfortunate when you have not a Scooby Doo what they’re on about. They could be screaming the meaning of life to my face and I’d still be staring at them like a dog who’s been shown a card trick. And that’s a shame when this band so desperately want to be heard.

So, this is, to an extent, half a review. I can only really review the music and how the lyrics sit within it as a sound, a feeling. ‘Champion En Serie’ sets the tone. An ominous double bass intro blasts off into a metal firestorm so ferocious that the acoustic…ness of the music only becomes apparent when it calms down. The initial rant drops out into a mellow, almost chamber music moment. Jazz appears before more speed fuelled ranting and thrash dynamics reappear. Et Viola.

And on it goes. ‘Sarcophage Du Succes’ begins as a drone. Then we have heavy free jazz, a bit more spoken word, a smattering of growling. Then a big old slow riff before more growling which drops out into a drumbeat. Then we have a minimal post rock riff thang before we launch into more metallic ranting.

‘Notre Grande Machine’ (see above) is a brief, thrashy blast while ‘Un Orage…’ (a storm!) is folky – a warm, rustic interlude. We’re then back into the metal, albeit with moments of flamenco, extreme Coltrane jazz and a Gallic equivalent of Metallica…MeGallica?

Taken on these terms this is a good album. The ranting, ever present throughout, began to become an irritation, which I’m sure was not the goal. It’s an album I would have enjoyed more had I known what they were saying (depending on what it is they’re actually saying). It’s clearly protest music, and, although it works as many things it’s resolutely metal! The acoustic instrumentation doesn’t feel like a gimmick at all. Dronte have made a metal album and these are the instruments they have chosen to play it on.

Released on 22 February 2019 by Apathia Records 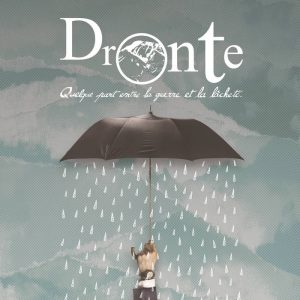