Descent on the up…

Wiegedood have been successfully flying the flag for Belgium’s extreme metal scene with increasing verve of late. Now their compatriots Drawn Into Descent look set to follow the path cleared by Wiegedood’s scorched black metal soundscapes. Drawn Into Descent are not though Wiegedood II. Their ever shifting sonic patterns are less fierce and confrontational. Which does not mean they are any less compelling. It’s simply that they operate in a different sonic spectrum.

Drawn Into Descent started out in 2013 with this self-titled debut album following a couple of years later. It has though received a recent re-release, courtesy of Immortal Frost Productions, who have wisely pushed the button on a 1,000-press CD run.

So for those who missed the boat two years ago what can they expect this time around? Well, the album explores dark moody environments in which the atmosphere is one of haunting foreboding. Yet while gloomy and despondent in places, what Drawn Into Descent don’t do is merely wallow in grief. There is hope carried within these instrumental lines and sufficient mellow moments to make this a refreshing and rewarding listen rather than an endurance course you are expected to conquer.

After the gentle waves of shimmering instrumental opener ‘Prelude’ have subsided, Drawn Into Descent start to reveal a little more of themselves  on ‘Elude’. This is a majestic piece that stretches out into the ether and then winds its ways around a gently undulating course full of luxurious curves and climbs. The vocal tones are husky rather than gravelley and they are sung rather than spat out, albeit in a strained shape. So while the black clouds seldom stray from above our heads there is a satisfying depth to this track in which momentum gathers brilliantly, new peaks aimed for and reached with sparkling abandon as Drawn Into Descent meticulously pile on the emotion, heartstrings plucked with ever increasing urgency. 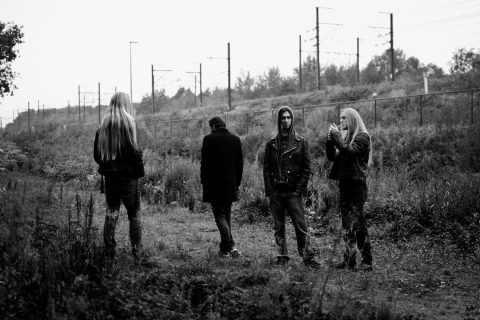 ‘Solitude’ is the third of the six compositions and at close to 10 minutes the longest. After an ambient melodic start the arrival of more forceful guitars and drums signal a sonic shift as some hefty grooves are served up, the tempo significantly raised. While solemn in tone, ‘Solitude’ is also a song rich in texture, Drawn Into Descent superbly embedding some death metal style growls from vocalist Bart Dirickx with sweeping arcs of sounds similar to the likes of the imperious northerners My Dying Bride.

The pace up until now has been fairly measured, with the Belgians exerting a close grip on the reins. This grip though definitely starts to loosen by the time we reach the fourth song ‘The Realm Of Unbecoming,’ a  number with more bite and certainly played out in a more overtly aggressive style. A gritty cut warns us that the mood is about to turn and the riffs soon crash in with a real venom, at a much faster paced and the vocals switch to full on black metal howls as the blastbeats attack from left and right. To their credit Drawn Into Descent then launch into a great melodic groove that really helps elevate the song to even more inspired heights.

On ‘Pariah’ the mood sinks into one of sheer desolation, the emotive weight compressing the sound as the Belgians plunge deep into the mire as the mood drags them down ever closer to the chambers of sorrow. Bart’s anguished cries are stretched to the absolute max while some of the spiralling guitar solos are spine-tingling in their depth and manner of execution. When the drums are gathered up for one final crescendo push the whole intoxicating effect is little short of mesmerising. ‘Gallows’ is a commanding album closer, superbly showcasing the best of what Drawn Into Descent have to offer. The contours are illuminated by some great solo work while the gears are moved through with consummate control as the Belgians work the tempo from every angle, unleashing a rasping groove in the climactic closing stages, vocals frequently silenced, as the instrumental surges are allowed to speak on their own, unchallenged.

Apparently a follow-up album from Drawn Into Descent may not be too far away. Its delivery is awaited with eager anticipation. 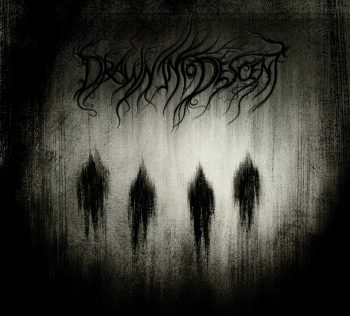