Now entering their second decade UK metal band DragonForce are about to unleash their 8th studio album Extreme Power Metal. Continuing the good work of 2017s Reaching to Infinity their latest opus isn’t breaking new ground, rather it’s the sound of a band who’ve reached a pinnacle and are now surveying where to go. However there’s plenty here to keep fans happy from the frantic, elongated solos to the fantasy themed lyrics, all the essential ingredients are here which will undoubtedly adhere the band to a new generation of fans.

The uninitiated, on hearing the intro of album opener (and lead single), might wonder why this record’s called Extreme Power Metal. With a Hi-NRG keyboard riff it’s sugary flavourings has something of a Eurovision entry about it. But no fear, after a minute of dramatic tension things finally snap and, like a dam bursting, DragonForce unleash their sonic assault. The blast beats fire so fast you expect them to explode while the high speed noodling is an air guitarists dream but it’s not recommended for those with tachophobia. What keeps Extreme Power Metal from becoming a continuous blur of speed are the tempo changes that ebb and flow throughout which makes the album something akin to a roller coaster ride. For example next cut ‘Cosmic Power of the Infinite Shred Machine’ features a dreamlike mid-section with ethereal guitar lines and angelic harmonies which only serve to highlight the more frenetic sections. The keys are provided by Coen Janssen (of Epica fame) and he gives things a distinctly ‘80s feel; rather like driving through a neon-soaked, Miami Vice cityscape.

Cinematic and evocative ‘The Last Dragonborn’ is seasoned with Oriental flourishes. Beginning with the traditional sound of the Japanese koto (which works surprisingly well with electric guitars) it’s a song that gently cascades with a bamboo flute floating atop. I always thought that ballads were the weakest link on previous DragonForce albums, and thankfully the band have navigated this problem by including a medium paced rocker that provides a little respite from the amphetamine charged soloing. In the live environment this song’s sure to be a winner: you can almost see all those lighters held high. With a chorus you’ll be humming for days and an insanely catchy hook that’ll immediately ensnare you ‘Heart Demolition’ is like Helloween meeting Queensryche and it’s a perfect slice of melodic metal. Extreme Power Metal is to be bassist Frédéric Leclercq’s last album with the band, but he’s going out in style with a fine solo opening ‘Troopers of the Stars’ that threatens to break the sound barrier.

DragonForce have been labelled everything from ‘Nintendo metal’ to ‘Bon Jovi on speed’ and both of those tags are pretty apt but they’ve avoided easy categorisation, which is always a good thing. However judging by this albums moniker they’ve embraced power metal in all its glory and ‘Razorblade Mountain’ is a real celebration of the genre with long stay guitarists Herman Li and Sam Totman trading solos like Dave Murray and Adrian Smith in their prime. ‘Strangers’ finds the band displaying their AOR leanings and it’s the perfect vehicle for Marc Hudson’s voice which, here, tails the melody. ‘Remembrance Day’ begins with the sound of bagpipes (really!) and this track is given that military marching feel that’s common in Celtic rock (think Big Country or the Skids)…if Thin Lizzy had played power metal it would sound like ‘Remembrance Day’. The sheer amount of styles on this album might surprise some, and it’s testament to the bands inventiveness that they have all these disparate strands on Extreme Power Metal. In lesser hands this could leave a fractured album but DragonForce tie up all the lose ends in a cohesive whole on album closer ‘My Heart Will Go On’. In three and a half blistering minutes they scrawl their sound on every available space and leave as they came in; in a whirl of sonic fury.

A loose thematic story connects Extreme Power Metal concerning space and the battle between good and evil and this is an album that finds DragonForce at the top of their game but still exploring the boundaries of metal while wrapping their quest in haunting melodies. A winner. 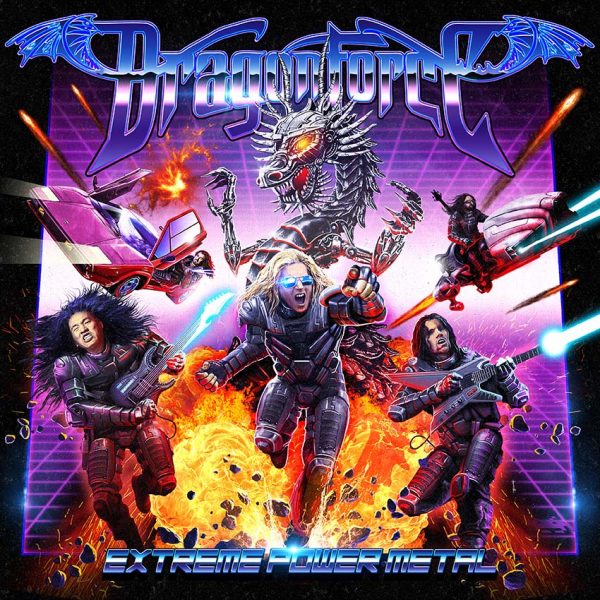