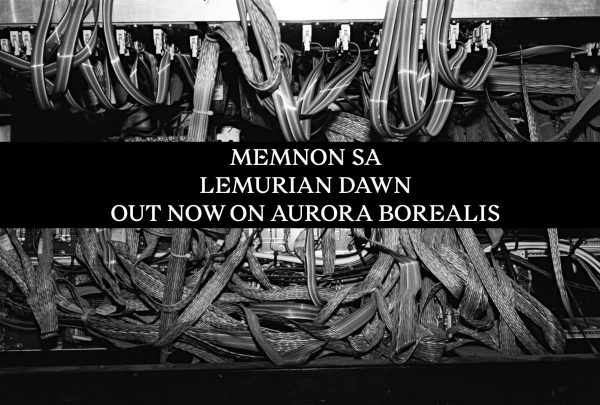 Paul Castles wakes up to a Lemurian Dawn, the new album from Memnon Sa, released via Aurora Borealis on 29 September, 2017

For some people seeking answers to some of life’s seemingly endless scroll of inexhaustible questions the answers are to be found in some faraway retreat where souls are cleansed and broken bodies restored to factory settings. Such holistic sanctuaries are not for everyone, especially when similar results can quite possibly be achieved by letting the rich contours of Lemurian Dawn roll over you.

This is the second album from Memnon Sa and as transcendental experiences go this is up there, opening track ‘Celestial Ark’ providing an early tonic for those seeking solace away from the digital and economic pressures that shape and define most lives. Not quite stationary, the seven-minute opener feels like the engine is running but the handbrake is on. Progress is slow, methodical and encased within a Spartan tribal beat and intergalactic keys, almost creating a First Encounters-type ambiance.

The bright light that fuels Memnon Sa is Misha Hering and this is his second album under the Memnon Sa name. While his 2015 release Citadel was something of a more conventional doom release, with plenty of heavy guitar riffage, Lemurian Dawn is made up of a series of constantly evolving soundscapes, most of which are channelled through cold electronic waves – keys predominately replacing strings to great effect. That’s not to say this is a Tubeway Army style synth fest. Lemurian Dawn is still very natural through the use of old school analogue synthesisers, ancient instruments, and occasional distant throat singing.

There’s a running time of 38 minutes for these five songs although Hering spent a year or so recording the album, working around his own work commitments as a recording engineer at his own Holy Mountain studio in London. As with Citadel, Lemurian Dawn is a collection of atmospheric compositions with the rider that this album looks forward into a more futuristic psychedelic world. The epic futuristic movie Prometheus is one of several inspirations, with Hering drawing from the stunning sci-fi visuals along with the powerfully emotive score of Eduard Artemyev.

After the blinking lights of opener ‘Celestial Ark’ go out the astronomical theme shifts to ‘Daughter of the Cosmos,’ the first of two nine-minute compositions, or perhaps we should say constellations. A white lightning keyboard groove stands on its own for the first six minutes with the final stages taken over by whispy ethereal movements. Vocals are almost absent, just restricted to occasional dissonant ‘throat singing’ – essentially some husky whispers that float weirdly above the mystical grooves.

By now you’re probably feeling as though your body and head no longer quite match. Certainly, listened to against dim lighting on soft cushions should have you away with the fairies although the oriental flavours resonate to deeper cuts on ‘Binary Sun,’ while the distant gentle banging of gongs maintains that Far Eastern atmosphere. No spoken words have been uttered at this point but the shimmering soundtrack has more than enough ebbs and flows to stimulate your senses and intrigue your mind. Put the amethyst crystals back in the draw and let Memnon Sa take away your troubles.

With ‘stress’ being the most commonly scrawled condition on a sicknote thesedays, maybe your GP should be prescribing a lie down with Lemurian Dawn. As such ‘Healing Chamber’ is perfectly named although it is just a tad pacier than the earlier tracks. The fifth and final track, of what is essentially an instrumental release, is the nine-minute closer ‘Ahura Mazda,’ gloomier and darker in texture but just as enthralling as the previous four tracks. Memnon Sa don’t do disposal. But if you’re looking for something deeper and more expressive then this captivating release will not disappoint.