After an immense opening day at Download Festival, what would Saturday offer the Midlands Rocks Team? The answer, a heck of a lot of classic rock with some modern metal bands who brought the house down. Oh, and of course the highly-anticipated Donington homecoming of (more or less) the original line-up of Guns N’ Roses (check out our review of them right here). 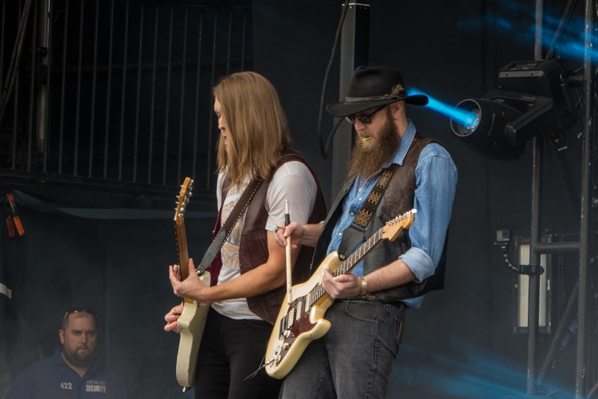 MR favourites Whiskey Myers have been absent from the UK for the past 12 months so their lunchtime slot on the main stage made for a welcome, if all too brief, return. The Red Dirt rockers had just twenty-five minutes to win over the crowd but their reputation preceded them and there was a good number in attendance considering the early start. Cody Cannon led the band through ‘Mud’ and ‘Early Morning Shakes’ with plenty of guitar duelling on display from Cody Tate and John Jeffers before percussionist Tony Kent made his way front and centre for his traditional and raucous cowbell solo – more proof that you never can truly have enough cowbell.

When Southampton Metalcore heroes Bury Tomorrow, made their Download debut in 2013 they recalled the story of how 12 months previously they were ready to hang up their instruments for good but somehow managed to dig deep and stuck it out to fight for their dreams. Their 2013 performance on the Pepsi Max stage was something special indeed (something anyone that witnessed can more than attest to) and we’re glad they managed to come out the other side because just look at them now. Bury Tomorrow even treated us to not one but TWO new songs set to appear on their upcoming album release Black Flame (due out on 13th July 2018). ‘Knife Of Gold’ and ‘Black Flame’ sounded up there with the British quintets best material. Get on Spotify if you haven’t heard them yet. If these tracks are anything to go by then we’re in for a real treat when the album drops. The crowd was seriously mental. 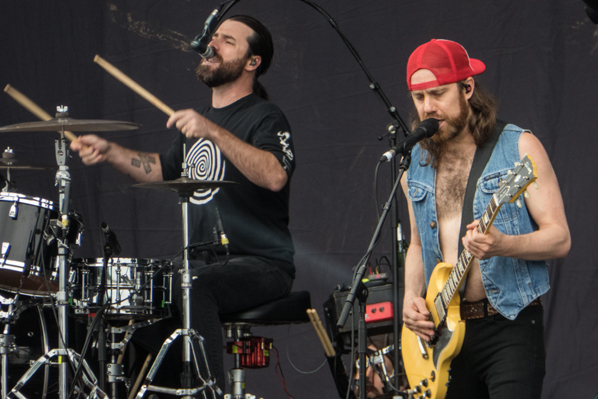 Canadian’s Monster Truck have built their sound on fuzzed up guitars and stoner inspired rockers and seem on the verge of stepping up to the next level. Showcasing material from upcoming third album True Rockers (due in September) the quartet of lead singer and bassist Jon Harvey, guitarist Jeremy Widerman, keyboardist Brandon Bliss and drummer Steve Kiely have a huge live sound that went over extremely well with the Donington faithful. They are endorsed by none other than Dee Sinder who has lent his pipes to the song ‘True Rocker’ and with bags of energy and enthusiasm don’t be surprised to see Monster Truck give Black Stone Cherry and the Cadillac Three a run for their money when the trio tour UK arenas in December.

Over on the second stage were Baby Metal. A few years have passed since they broke the internet when videos of ‘Gimme Chocolate!!’ first surfaced and Su-Metal and co have proven they’re not just a viral internet fad. With internet speculation rife over where backup singer/dancer Yui Metal currently is (your guess is as good as ours), we can confirm she was not present with the band at Download either. It probably wouldn’t have mattered if it had just been the duo of Su-Metal and Moa Metal on the stage but in Yui Metal’s absence, Baby Metal bolstered their dance troupe with more dancers to cover the larger Download stage, enabling them to throw all their usual shapes. It took attention away from the band being a woman down and if you weren’t aware Yui was missing you wouldn’t have been able to tell the difference. The theatrics and staging were simply sublime.

So onto the music then. They opened with cinematic footage depicting the next instalment of the never-ending saga as told by the Fox God himself. A staple of any Baby Metal gig. This new era of the band documents ‘The Chosen Seven’ and announces seven spirits and a darker side of Baby Metal which exists. All very cryptic and intriguing. We’ll have to see where this one goes. It’s fresh, it’s fast and it’s furious and this accompanied with the ridiculously off the charts virtuosity we’ve come to expect from the Kami band, would suggest that there is only more to come from Baby Metal. It’s exciting. It pushes boundaries. But above all, it’s just really, really fun. Love them or hate them, Baby Metal is here to stay and naturally, we’re already looking forward to the next instalment for the chosen seven from the Fox God. 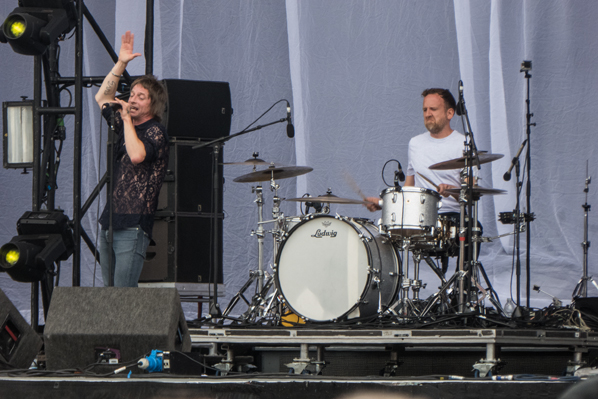 Mid afternoon on the main stage saw The Temperance Movement deliver a mellow, laid-back and bluesy set with Phil Campbell’s soulful voice offering something a little bit different from the acts that had come before. There is no doubt TTM are quality musicians and wear their influences on their sleeves with the blues based ‘White Bear’ and ‘A Deeper Cut’ being mid-set highlights but in truth this is a band far more suited to dimly lit venues on dark evenings as opposed to playing to an adrenaline fuelled rock and metal festival in broad daylight.

Flying high from the warm reception to 2018 release Reverence, expectations were high for Aussie metallers, Parkway Drive, and they absolutely smashed it and then some. They arrived with the new school Parkway hits kicking off proceedings in suitably heavy style with ‘Wishing Wells’ into the gang-chant laden ‘Prey’. They momentarily returned to more familiar territory with Vice Grip in all its riff glory and Dedicated with its immense break your neck breakdowns, before more new school which came in the form of the eerie and atmospheric ‘Cemetery Bloom’ building into ‘The Void’ – one of the many stand out tracks from Reverence.

The crowd-surfers and pits were out in force the entire duration of the set in surely one of the most energetic sets Download’s second stage has ever seen. They returned to the stage for one last dance with a tonne of fire and when we say fire, we don’t mean the Scouts Bonfire Night kind, we mean the entire stage alight kind. Only Rammstein could rival such flames and firepower. Then the tones of ‘Bottom Feeder’ kicked in and the crowd lost it one more time. When you have a whole field jumping front-to-back, back-to-front you know you’ve just witnessed something very special. They killed it. More to come from Parkway. We’ve got our money on it.

Black Stone Cherry have quietly been moving up the ranks having played across all of Download’s stages in their rise. This time they had the honour of playing second-fiddle to Guns N’ Roses over on the Main Stage. BSC brought their catchy Southern Rock in abundance to Donington. With huge rock anthems in their armoury, the band delivered a solid performance which oozed of confidence thanks to the talents if frontman Chris Robertson and bandmates who firmly had the crowd in the palm of their hands from start to finish.

The sing-alongs were all there in the form of ‘Blind Man’, ‘Me & Mary Jane’, ‘Blame It On The Boom Boom’, ‘White Trash Millionaire’ and of course ‘Lonely Train’ from the debut self-titled release. It’s polished and slick to the nines and you could tell they were loving every moment, even going as far to chuck in a few covers including Hendrix’s ‘Foxy Lady’ and The Wailers ‘Stir It Up’. Tracks from 2018’s Family Tree including the title track were all represented too and sounded stellar. With Saturday packed to the brim specifically for GNR, it’s a safe bet that anyone who hadn’t heard of BSC left as a fan. Another band who’ve put in a convincing claim to be amongst the pool of artists that could be a future headliner of the festival.

Setlist:-
Burnin’
Blind Man
Rain Wizard
Stir It Up
Me and Mary Jane
In My Blood
Like I Roll
Foxy Lady
Blame It on the Boom Boom
White Trash Millionaire
Lonely Train
Bad Habit
Tired of the Rain
Cheaper to Drink Alone
Family Tree