Words and Images by Claire Frays

Scream for me Donington! Scream for me Download! The Midlands Rocks team once again returned to the hallowed Donington grounds for a weekend packed with rock, metal and (thankfully) a lot of sunshine! Fresh from the fields and ready to tell tales from Donington, we bring you the first of our three-part Download Festival 2018 weekend review.

The last time Midlands Rocks witnessed Avatar, a guy wearing a dress started an epic synchronised Robot Dance in the mosh pit. Expectations were high (as they always are when it comes to Swedish Metal bands) and the Gothenburg quartet didn’t disappoint despite occupying the early morning slot on their third Download Fest appearance. Wasting no time whatsoever, Avatar appeared with a particularly grandiose entrance to the main stage for ‘A Statue of the King’, which saw guitarist Jonas “Kungen” Jarlsby crowned and sat atop a throne rising above Donington whilst frontman Johannes Eckerström commanded the crowd from a lectern. With theatrics in abundance, and Eckerström strutting the stage catwalk, the Swedes blasted their way through a short but very sweet blitz of early morning riffage. They ended with the headbanging and rather apt ‘Smells Like A Freakshow’. 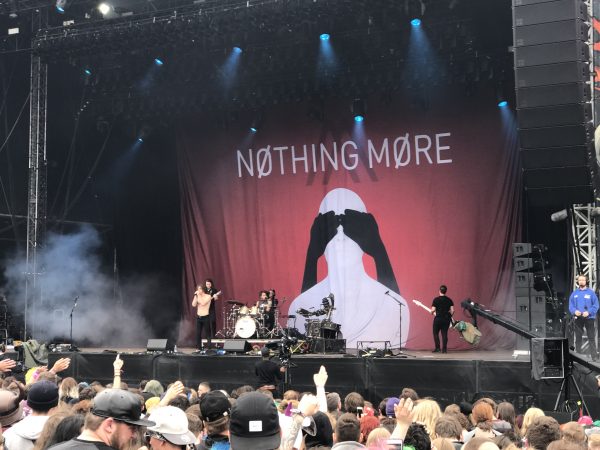 And then came Nothing More. Last time they played Donington they played a rather subdued, and under-the-radar performance on the Red Bull Stage of all places. The enigmatic Texans have come a long way since then though. Now with a stable line-up, accompanied with high-profile stints across the states opening for arena rock acts such as Five Finger Death Punch, Nothing More even managed to go as far as securing no less than three Grammy nominations across the Rock categories last year. So riding high on this, what could Nothing More bring to the table at Download? The answer? Energy in abundance, big songs with massive choruses, and a stage presence that many more experienced bands wish they had.

Sticking largely to a set of tracks from 2017’s ‘The Stories We Tell Ourselves’, Nothing More proved with this performance that they’re more than ready for bigger, better UK tours and have the potential to hold their own in more esteemed slots at Download in the future. ‘This Is The Time (Ballast) and a cover of Skrillex’s First of the Year (Equinox) equipped with frontman Johnny Hawkins barefoot riding on a crazy drum contraption, brought a thrilling set to a close. We suspect this won’t be the last we see of Nothing More on UK shores. Watch this space.

American rockers CKY brought the old school to a packed-out Zippo Encore Stage playing material exclusively from their more widely known first three releases. Frontman Chad I Ginsburg made an apt comment before the band launched into the one song everyone was waiting for, even going as far to poke fun at the fact his band goes under the radar but if you hum the guitar riffs to the infamous Tony Hawk’s Skateboarding song ’96 Quite Bitter Beings’ you know exactly who CKY is. And he was right. The moment it kicked in saw punters headbang like it was the naughties again and of course sing that killer guitar riff. Nicely done lads. One thing though, where was ‘Escape From Hellview’!? 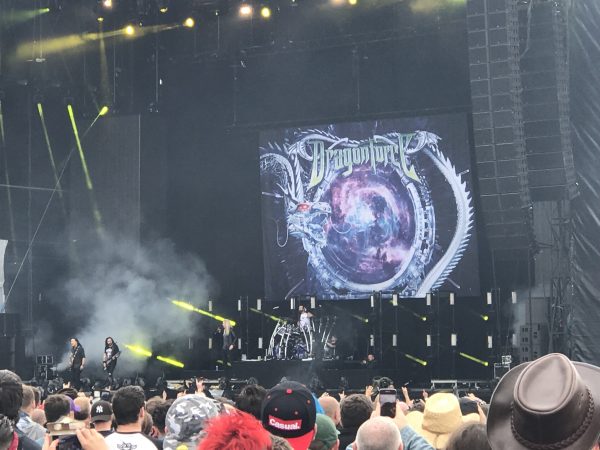 Power Metal heroes DragonForce may have been marred by a serious of niggling technical glitches throughout their set including Herman Li’s guitar refusing to play ball, but thanks to frontman Marc Hudson’s command of the crowd, still managed to bring the house down on the Main Stage for a storming rendition of the Guitar Hero famed ‘Through the Fire and the Flames’.

Party master Andrew W.K in only his second Download appearance to date transformed the download party into overdrive on the second stage in a 40-minute masterclass of how to party hard. Opening with She Is Beautiful the party just never really stopped from the opening riff to the finale.The highlights were plentiful. The anthemic ‘Music Is Worth Living For’ from 2018’s ‘Your Not Alone’ sounded huge in the arena and followed with ‘We Want Fun’ what more could you need?. 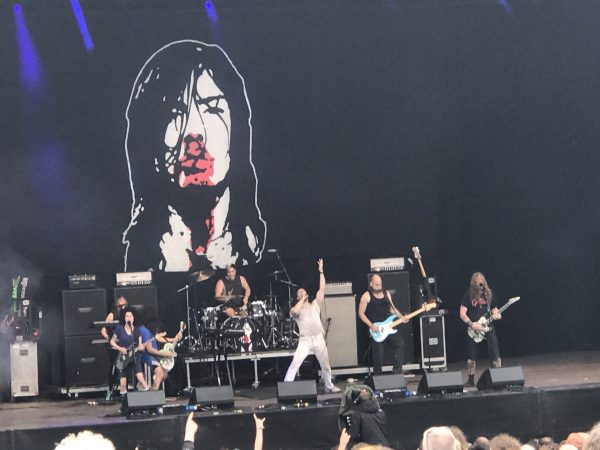 Then there were the little nuances dotted throughout the set. Jools Holland eat your heart out. We’re talking crazy random keyboard solos that were just off-the-wall in skill level yet fit so perfectly well amongst all of the other instruments. W.K is a multi-instrumental whizz kid and clearly knows his Bach from his Beethoven, his Mahler from his Mozart. Culminating in a self-proclaimed “new year’s eve clock strikes twelve” affair, Andrew WK joined by the crowd who were perched down and ready to jump on one, started the countdown from 100. Slowly numbers were reeled off, then we were at 50, 40, 30, 20, ten… nine… five… four… and when that countdown hit one, by God the crowd lost it, as the moment everyone was waiting for arrived. The moment the bouncing intro and excitement-laden riffs of Party Hard ricocheted across Donington Park – and jump we did. Props must go to WK’s backing band all of whom are outstanding musicians in their own right. How they keep up with Andrew WK’s non-stop all-guns-blazing energy is a mystery foretold. Truly the party to end all parties. Oh, and did we mention his Pizza shaped guitar!? Major guitar envy from us and everyone who saw it. Not a soul left the second stage without the biggest of smiles etched on their face. 40 minutes just wasn’t long enough.

And then came the turn of the Danes, Volbeat. Truly the ultimate festival band. There we said it. Sunny weather and the uplifting tones of Volbeat. Is anything better? The answer is hell no. Opening with ‘The Devils Bleeding Crown’ and the formidable sing-a-long banger, ‘Lola Montez’, the oh-so-stylish Michael Paulsen (and co!) wasted no time in bringing pure joy and epic riffage to Download.When you see Volbeat you just know they’re going to hit it and this performance was no exception. It’s fair to say that no other band worked the crowd better on Main Stage all weekend with Paulsen, Rob Caggiano and bassist Kaspar Boye Larsen frequently racing the stage end-to-end with their gnarly rockabilly fused licks in true style. 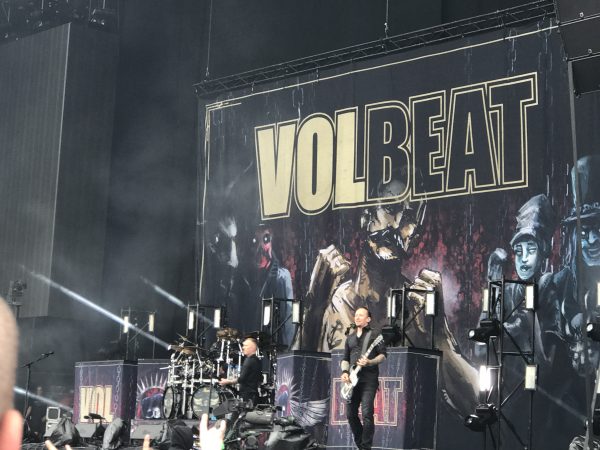 The massive ‘Dead But Rising’ brought the heavy (that main riff is just something else on the awesome scale!) and even Napalm Death’s Barney Greenway made a surprise guest appearance, joining the band on stage for ‘Evelyn’. Not putting a foot wrong, they ended proceedings in usual style with a storming rendition of ‘Still Counting’ in a set that went by way too fast. It’s clear that Volbeat is firing on all cylinders with the world at their feet and FINALLY the UK is starting to take notice. We’re a bit behind our Mainland European counterparts who have already put these chaps into the arenas. Future headliners in waiting with no shadow of a doubt. 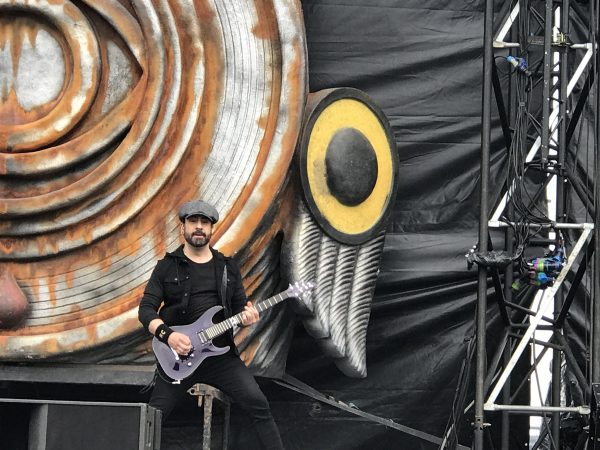 Back with a vengeance for their second crack at the headliner slot, Avenged Sevenfold returned to Donington. Opening with The Stage into Afterlife, Avenged took fans on a journey of varied hits and old school classics from their extensive back catalogue – an approach that ensured fans from the band’s various eras were more than accommodated.
The pyro was in abundance with the A7x mascot resembling Iron Maiden’s Eddie playing a key role – first appearing wearing the biggest crown you’ve ever seen for Hail To The King and later in the set as a Space Man. The fireworks were on point too.
M Shadows slowed things down for renditions of Pink Floyd’s ‘Wish You Were Here’ which was dedicated to Anthony Bourdain and a tear-jerking ‘So Far Away’ for The Rev.

Things got heavy when Avenged broke out their old school shredding masterclass classics – a trip down memory lane for the diehards – in the form of Eternal Rest from 2003’s ‘Waking The Fallen’ and of course the mandatory ‘Bat Country’ from ‘City of Evil’. Whenever M Shadows and co break out these earlier tunes it’s just sublime. You can feel the intensity. Literally.
The avant-garde seven-minute masterpiece, ‘A Little Piece of Heaven’ backed-up with Unholy Confessions brought avenged second and more convincing stab at headliner status to a close. 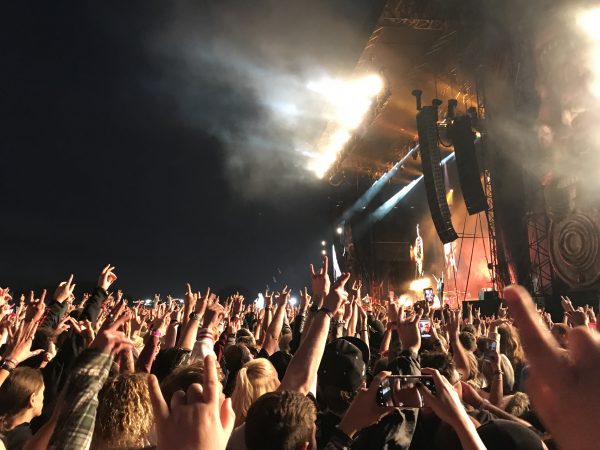 Whenever the younger headliners crop up, it forces you to contemplate the world without the current crop of legendary headliners at festivals. Sabbath has already gone, surely Maiden, AC/DC et al are coming closer to the end. It begs the question (and much-debated topic) of who the new breed of headliners are and whether they can take the metal torch and carry on the legacy of the elite metal bands. Maybe it’s early days, but will there come a day when seeing Avenged evokes the same emotion and prestige of the Black Sabbath, Maiden, and Metallica school of headliners? We’re not sure. They’ve so far managed to come further than all of their contemporaries – the Trivium’s, the Bullet For My Valentine’s who were supposed to make it on the big stage before them. They’ve broken the glass ceiling (no mean feat), but it’s not the same as watching any of the aforementioned legend bands tear it up. Whether this will come with time and in 20 years (if they’re still around) it will be a big deal to the young whippersnapper metalheads who’re not of download age yet, to see Avenged Sevenfold, only time will tell…