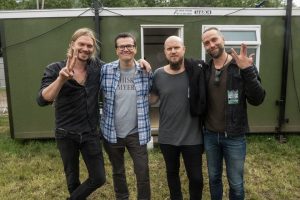 After a brief hiatus Finnish rockers Von Hertzen Brothers returned late in 2017 with seventh album War Is Over which opens with the stunning twelve minute title track. On the road across Europe this summer and throughout the rest of the year, Midlands Rocks Dean Pedley caught up with the band just after their early set at Download.

Welcome back to Download. The last time we spoke was back in 2011 at High Voltage festival…

Wow! That was one of our first big festivals over here in the UK….

You’ve been back many times since, what do you enjoy about playing over here?

The weather and the two taps in the bathroom! Basically it’s good to come back because we feel like there are people here who actually get it you know. They get our music and we feel that people appreciate that we are part of the lineage of UK Prog rock and bringing our Scandinavian elements to that. And there is a mutual understanding and we feel like we kind of belong here music-wise. And that is something that you sense very clearly when you talk to people and also on the stage…people understand the way that we do things.

You mention UK Prog…two bands who have celebrated fiftieth anniversaries recently are Jethro Tull and Yes. Were they amongst your early influences?

Definitely, those are the bands that we would listen too when we first learnt to play an instrument and also Queen, Rainbow, Deep Purple and the Classic rock side of things. Those bands were huge for us and that’s how we learnt to play by listening to them and developing into our own style.

How was the set earlier today?

It was intense playing twenty five minutes, we only played four songs but we started out with a ten minute epic so that was nice. When you give all for twenty five minutes and you still have more to give you feel like “is that all we have”. But it is like that for many bands here today and it was really fun, we had a great gig. People showed up, it was an early stage time and you never know because if the weather is bad nobody will be around they will wait for the headliners. But the weather was good, people wanted to come and there was a good crowd there.

Tonight’s headliners are Guns N’ Roses and you mentioned Queen just now, I’ve not seen Axl and Slash on the same stage since the Freddie Mercury Tribute Concert back in 1992…

Yes we definitely want to see Axl and Slash together later today. I remember that concert you mentioned… it was on the TV in Finland…and Axl coming onto the stage spinning and I remember recording that gig and watching it over and over again. Actually I must tell you this, we flew here yesterday on Norwegian Airlines and they have in the tail pictures of people and it used to be only famous Norwegian people but when we came to the tarmac the picture on our plane was Freddie! So we felt this was a sign…we were flying to Download and Freddie was flying with us! So that was a good omen.

A couple of years ago after 2015’s New Day Rising album you announced you were taking break…did you need time to reflect on the future of the band?

We ran out of batteries; we worked really hard for five years with a set of people and then we started feeling that it was coming towards the end of that combination. So we ended up being in a place where it was sat down and thought about if we still had it in us to continue. I think it is only healthy to question yourself because we want to do this for the right reasons, we need to feel that we have the songs, the energy and the people that we love working with because if we don’t then it becomes a drag and the fun disappears. So if that has gone that reflects in the audience and the music and we feel this is like Chapter two for the band.

Well you definitely came back with a really strong album. What are the plans for the rest of the year?

We are playing around fifteen Finnish festivals and then we will be back in the UK for Ramblin’ Man festival in July. And then we are coming back over here again later in the year for some dates with Uriah Heep. We feel there is so much musicality in the band right now and this is the best it has been, we feel very proud going out and playing to people and it is a good feeling.

For more on the Von Hertzen Brothers:-